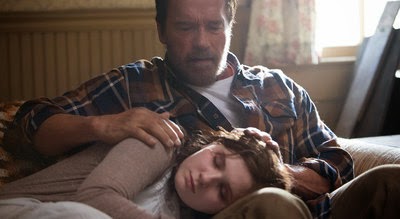 Arnold Schwarzenegger's lowest budget film since TERMINATOR is a breath of fresah air in the "zombie"  genre and in Arnold's career. Actually the only need to know is that this is destined to be on any number of  year end best of lists.

The film is set at a time when a necro-virus is ravaging the world. The disease causes decay and cannibalistic madness. Because it takes weeks to turn life goes on, but everyone is afraid of what can happen. As the film opens Maggie has fled from her home into the city. She has been infected and wants to spare her family. Her father wants his daughter home so he goes and brings her home. We watch as she slowly succumbs.

Bleak, heart breakingly sad film is not a horror film but an allegory about watching loved ones die. Its a film that is not even remotely an action film (which pissed off numerous people who went to the world premiere looking for Arnold to fight zombie hordes.) A carefully mannered drama the film tugs at the heart strings as we watch and see one man watch the thing he loves most wither away.  If you changed it all to cancer people would be talking Oscars.

There is no action. There is one jump and a kind of fight, There is just life trying to go on. Its the sort of thing that gets under your skin and makes you sad.

To me this plays out better than say WALKING DEAD. it makes sense. The world doesn't implode instantly, it goes on. There is an explanation of where all the people went or might have gone. In the opening of WALKING DEAD or most other zombie films you have abandoned cars and looting and all of that. Why isn't clear. If you look at what happens in a place where real diseases break out and kill thousands (say in Liberia during the Ebola outbreak) things don't just break down but go on.

To me the slow turning makes sense, after all other than say food poisoning when have you ever really known a disease to instantly infect you as it does in other zombie films? No you don't. The slow spread within the infected is much more devastating as a result since we and they see the end coming.

That things are so emotional is do in large part to the cast. Everyone, including Arnold sell their roles. Schwarzenegger is so good that you can't help but wonder why he wasn't doing straight acting before. He is a real father deeply in love with his daughter and you see how he would do anything for her-even if it means just trying to have her in a familiar place while she awaits her ultimate ending.

One of the real surprises at Tribeca, and very possibly the year. I say that because I expected this to be a dumb zombie film only to find it to be something thoughtful and haunting.

Assuming you can accept this not being a typical zombie film this is a must see.

(An aside- there is no indication in the film that people actually die and come back- its explained as a disease that destroys the body. However the director said in an interview, I believe with Leslie Coffin that they actually die but its not specified in the film)

MAGGIE opens in theaters and will be available on various VOD platforms starting May 8
Posted by Steve Kopian at April 28, 2015