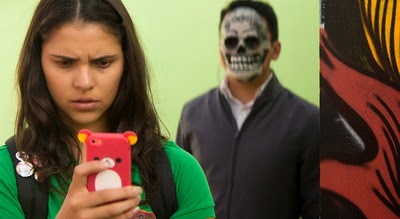 Seemingly mild mannered office worker with girlfriend on the side kidnaps a young girl and holds her for a period of time. He then lets her go after getting a promotion . Not long after that the girl hears a certain piece of piano music and goes berserk and takes bloody revenge.

This film had huge number of walk outs at the Tribeca press screening. I was considering it but the film eventually went so far off the rails I had to hang around to see where it all ended.

The first hour of the film is this weird kidnap/ women tortured film that seems disconnected to anything. It's not until almost the hour long mark that we find out that the girl is the kidnapper's boss's daughter and that it was a grand attempt to drive him crazy. No it makes no sense and it just seems misogynistic. The last half hour which is blood soaked  revenge drama makes no sense either, it seems brought in from another planet,  AT the same time it moves along with such ferocity that I couldn't stop watching

I don't really like the film much and I know it split the audience. After the film Lesley Coffin, CHris Bourne, Joe Bendel and myself had a long discussion about the film in the lobby. Everyone had their opinion which they stated with passion, but no one convinced anyone to change their minds, even so it was a great discussion.

Should you see it? No idea and this time out you're on your own.
Posted by Steve Kopian at April 24, 2015