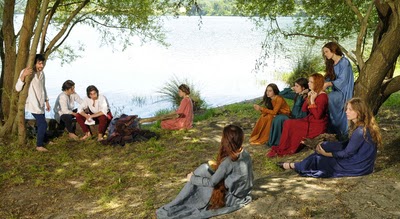 The Taviani Brother's adaption of the Decameron is an amusing trifle that has the feeling it should have been much longer.

In 1348 as the plague ravages Florence a group of friends flee into the country. There they hang out and tell stories. Five stories are told over the course of the film

Shot to look like paintings of the period the film is not particularly deep. While the stories deal with love and death there is a great deal of humor- some of which doesn't seem intentional (the final story is profoundly the wrong sort of silly). Its a film that very much works in the moment.

I like the film but I don't see the point. I would think that the stories picked would form some greater whole but they don't- though to be honest I sense that something was cut out. Late in the film the wrap around story disappears and we simply get run on stories.

The stories themselves are a mixed bunch. The first one concerning a woman presumed killed by the plague who recovers is quite good and works from start to finish. The second, concerning a trick on a slow witted painter is amusing(its supposed to be funny) until the end turns black -even if the storyteller tacked on a happier ending. The final story concerning a falconer and the woman he loves is funny for all the wrong reasons. I was left feeling WTF was that when it ended.

If you want several romantic trifles, give it a shot, but my guess is you're not going to feel as though you've had a meal.
Posted by Steve Kopian at April 21, 2015