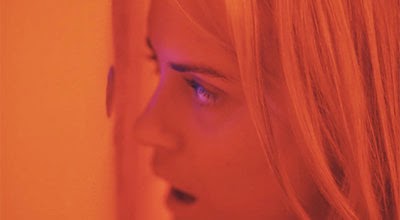 Another film that was seemed to be high on critics must see lists at the Tribeca pre-fest screening, a fact borne out by the standing room only screening. Its a film that has me wondering what everyone heard about the film from Sundance

Actually I know what they had heard- that the film had full frontal male nudity that's used for comic effect. While the use of the nudity is fine in context, the actual nudity or rather obvious rubber privates, is nothing special.

The plot of the film has a couple and their son new to LA going to dinner with a couple they meet in the park.What results is an off kilter post dinner adults only evening as the new arrivals at first are` thrilled by their new friends and slowly realize they aren't sure what the motives are  as they try to deduce if their hosts are playing some game. We watch as the evening goes over the place as we see paintings of things best unseen, love is questioned and penis size becomes a running plot point.

While from far a bad film, the film isn't really that deserving of the love it's found. Outside of the frankness of some discussions and the full frontal nudity, the film is little more than a sex comedy as done by a writer director who doesn't seem to have lived much.  While many of the jokes are funny, many of the them are either cliches or have punchline telegraphed- you know the kids will walk in at an inopportune time, you'll know what Jonathan Schwartzman;s deal is before the people on screen and odds are you'll know what the paintings are. Worse while there numerous smiles very little is laugh out loud funny.