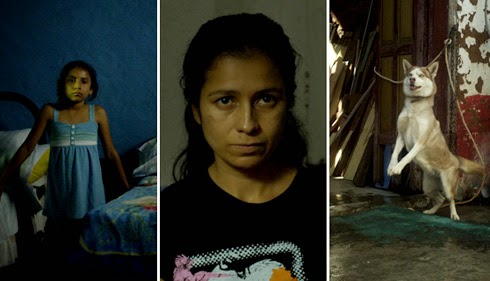 THE PALACE is a short film by Nicolas Pereda that focuses on seventeen women who are living together in a house in Mexico. Its never really clear why they are living or what the relationship between everyone is. There is some sort of interconnectedness to them which is revealed in part through a series of sequences where things happen or the women talk to the camera.

To be honest I'm not sure what I make of the film. While I found it interesting for a while I found the film's lack of answers bothersome. I suspect that had I seen this film first instead of last in the group of Art of the Real Titles I would have liked it more. However the fact that it was yet another observational film kind of wore on me, especially since things are a bit unclear as to the hows and whys. With some of the other films you can piece things together if you are patient, here there is no chance there simply is the women and for me it wasn't enough to sustain my interest for the full 36 minutes.

Its not terrible but it wasn't my cup of tea.

Email ThisBlogThis!Share to TwitterShare to FacebookShare to Pinterest
Labels: art of the real 2015, documentary, mexico, shorts