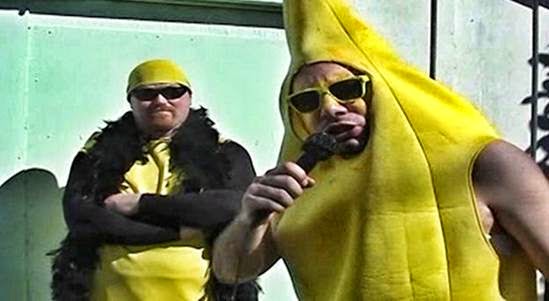 Portrait of SSP-The Seattle Semi Pro Wrestling. A cabaret style send up of professional wrestling that prided itself on the accepting outsiders however when one of their wrestlers didn't get the joke things went sideways.

It all starts when Paul an loner pro wrestling fan joined the SSP. The group thought Paul's muscular build made him the perfect person to be a wrestler. He worked hard and trained with everyone. But Paul didn't socialize well. Since the events were held in a bar and because the main post wrestling socialization was drinking Paul didn't fit in. Growing up with an alcoholic mother made it difficult for him to hang around in the bars. When he was finally allowed to wrestle he was given a banana costume. It was hoped that he would be goofy and loosen up instead he took it way too seriously. When it was decided to retire the banana and have Paul play a new character he walked away and turned the group into the Washington State Department of Licensing

This is a highly entertaining film that is 85 minutes with good people. You like everyone, even Paul despite his upsetting the apple cart. Watching it I had a great time and  when I was done I started to call my friends to tell them that they had to see this.