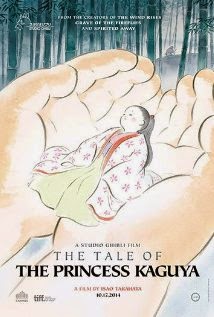 The film is the story of a woodcutter and his wife who find the title character in a piece of bamboo. She is the banished princess from the moon kingdom and has been sent to earth as punishment, Given enough money to raise the girl in style the family moves to the big city where intrigue occurs all in the name of winning the young woman's hand.

While the film is deeply moving, you will cheer and cry and feel all sorts of emotions, what I want to mention is the art work. I don't think I've ever seen a film that is quite as expressive as this one. Lord knows I've never see a film that has been so daring as to change form and style to get the moment right, never mind if it alters the look of the film, things change if the emotional need of the film changes.

Watch how director Isao Takahata uses animation. Look at the way the simple drawing of the first part of the film when the woodcutter and his wife find their young charge gives way to more complex and more colorful drawings as the story moves to the city.

Look at how Takahata alters the animation style from realistic (watch the motions of the characters at the start-the characters move like real people) to cartoony (the action of many of the characters in the court) to abstract (Kayuga's flight into the forest  is simply line without real form) depending upon whats happening. The image adds weight and speaks volumes about the characters emotional state. We can tell the emotion of a scene just by looking at the way things are drawn and colored.

You have never seen anything quite like this before.

This is an amazing and deeply moving film.

The film is a masterpiece. It is also a must see for anyone who loves great cinema or great art.
Posted by Steve Kopian at April 09, 2015