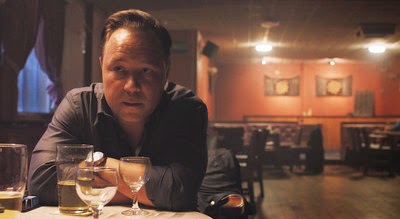 Cop Michael Logan is a bad guy. he's into everything crooked. If there is a way to make money doing it Logan will give it ago. Trouble however is lurking and his life is about to become worse than anyone can ever imagine beginning with the death of his partner in a drug drug scheme, from there  he discovers he's been picked by an old friend he turned on to be part of his special team and to top it all off the Internal Affairs guys are snooping around. If you think that's bad wait until you see how bad it gets.

Bloody foulmouthed and occasionally very violent portrait of  a cop in a downward spiral. This is a visceral film that at times is a poke in the eye with a red hot needle.Think of this as a kind of English Bad Lieutenant crossed with Scarface. Its a film that will make you wince- it made one of the people at the press screening begin to talk to the screen at the end- they were praying it was going to be all over.

Yea it's that kind of a film.

Its the kind of film where there are no real good guys only less bad people. In talking to one of the other writers on the subway home I was schooled on why the one person I thought was innocent really wasn't, in her way even she has blood on her hands.

I should warn you that this is the sort of film where the violence is so bad that even the people on screen flee from it.

I really like this film a great deal. Its a film that really provokes a reaction and a real sense of dread.

I do have to point something out, the film is not a conventional crime thriller. The film is a portrait of Michael Logan and is about his inner landscape. I say this as a word of warning because there are times when the film makes no logical sense, but instead makes perfect emotional sense. The film's twists are set up to cause our emotions to knot, and knot they do big time. Additionally where the film ends is going to piss off some people. I know some people who will love this film until the end, at which point they will balk because everything isn't resolved. When the film ended I could hear the voices of some friends from the day job screaming in my ear. As a portrait of of our anti-hero the point where the film ends at the perfect place. However if you want it all tied up in a neat little bow  you maybe upset.

Your potential reservations aside this is a fantastic little thriller that will leave you bruised and battered in your seat. Very much one of the must see films of the festival (or if not the festival when it hits theaters in a couple of weeks)
Posted by Steve Kopian at April 21, 2015