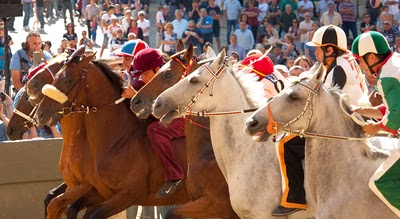 I don't have a great deal to say about PALIO other than Run do not walk to get tickets to see it in the theater. This documentary is absolutely jawdropping and amazing when seen on a big screen with big sound.  It is one of the must see films at this years Tribeca

The film is the story of the Palio, the world's oldest horse race. A contest between ten discticts in the Italian city Sienna, the race consists of three laps around the inside of the central plaza of the city. Its a bone crushing race where riders and horses routinely crash into the walls, jockeys bribe each other horse wins and the losing jockey is an outcast. Its the only race in the world where a riderless horse can still win the race.

Words can not describe what this film is like other than saying short of going to the race you've never seen anything like this. Its an imersive experience that that will have you sitting wide eyed and mumbling.  If it sounds and plays like a real life spaghetti western its only because  they lift Ennico Morricone riffs. If you've seen the producers earlier film SENNA you'll understand when I say this is as exciting as the best race film.

This movie is freaking amazing. You have to see this.

For tickets and more information go to the films web page/