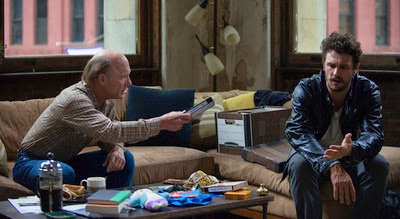 Loosely based on Stephen Elliot's memoir tells the story of struggling writer Elliot who has a bug hit with his first book about his troubled childhood. Everything is going along fine until his supposedly dead father resurfaces to put the story straight.

A look at memory and reality the film raises some intriguing questions. As someone says late in the game why is it that we all think our memories are perfect but know the memories of everyone else are wrong. The film is also a killer look at the struggle between fathers and sons to love each other.

While I know the film is flawed (there is no way Elliot could live alone in the apartment he does on what he makes) and far removed from the source book (the story took place in California not New York and he had roommates) I still got carried away with story thanks to the cast, in particular Ed Harris as Elliot's father. Showing a range that is rare, lets face it few roles have a range this wide, Harris hits every note as required and then adds levels of unexpected shading. This is one of those performances that transcends the film it's in to become something that people will be talking about  at years end.

Is this worth seeing. I think so. It may not be the greatest film ever but it raises some interesting issues.

ADDENDUM:
Stephen Elliot on the film at the Vulture
Posted by Steve Kopian at April 21, 2015