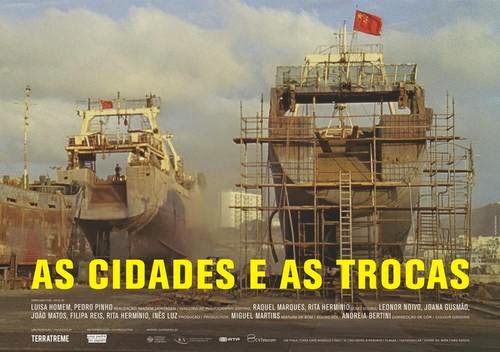 TRADING CITIES is a portrait of Cape Verde's changing existence. Rapidly changing,the city is shifting from industrial center into a tourist mecca. We watch the industry, the tourists and the people caught in the middle.

I am not a particular fan of observational documentaries. I find that many of them, a good number of Frederick Wiseman's films for example, confuse observing with documenting. There is a tendency to think that just because we are watching something happen we are learning about it when that always isn't the case. More often then not we're just watching things happen with no rhyme or reason. I mention this because I went into TRADING CITIES with a kind of chip on my shoulder. The film was going to have to really bowl me over to get my respect.

Somewhere in the juxtaposition of incredible images and run of the mill ones the film paints a wonderful portrait of a place and people in the middle of change. Answers are not always forth coming or readily apparent, but if you are patient you will be given enough information that you'll be pondering things for hours afterward.

While not for all tastes, the film can seem slow and the film is probably too long at 140 minutes, the film will impress those ready for it. The film will also delight those who thrive on glorious cinematic imagery. This film is full of jaw dropping images that will blow your mind on the big screen (the picture above is just a taste).

A must for the adventurous film goer.

For tickets and mor information go here.
Posted by Steve Kopian at April 13, 2015

Email ThisBlogThis!Share to TwitterShare to FacebookShare to Pinterest
Labels: art of the real 2015, documentary, portugal