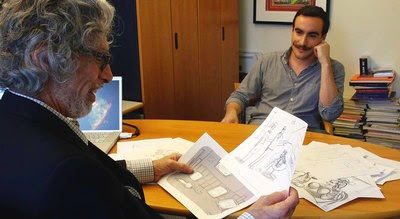 Portrait of the New Yorker cartoons and the magazines present editor Bob Mankoff.

I'm not a fan of this film. To me a PBS documentary on the same subject a few years back was much better and did the same thing in half the time. While the film has some great moments (911), over all it's all much too rambling.

Actually part of the problem is that Mankoff is not an interesting enough guy to sustain 83 minutes. Its not that there is anything wrong with him rather he's not that compelling. Much more compelling are the younger cartoonists like Liana Finck and the wild Ed Steed who just decided one day that he could be a cartoonist.

For me the film is responsible for an unintentional side effect, after seeing the film it has become very obvious that the New Yorker cartoons are very much one note, not only that the funniest ones are the ones that aren't published.

Not terrible, but nothing you need rush out to see. Wait for it to show up on PBS where I'm certain it will end up

ADDENDUM: The film was picked up by HBO and plays December 7-wait for the screening there and don't waste your money seeing it in a theater unless there is a Q&A
Posted by Steve Kopian at April 27, 2015