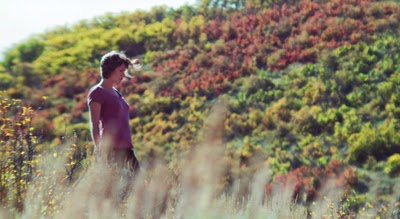 I'm very curious why this film is being called a comedy when most of the time it's not funny. I guess because its not a tragedy since no one dies it's safe to call it a comedy.

I'm going to do something some of you might consider bad, I'm going to tell you the entire plot. However when you see how thin it is you'll understand that nothing is lost knowing it (hell it's a couple of words longer than the official synopsis)

Molly is a newish mother with a two year old. Stuck at home while here husband is away she feels trapped. When the chance comes to meet her old high school buddies, all guys, she leaves her son with his father and heads off to meet the guys. Once there they all head off to go tubing while doing mushrooms. That's it, that's the whole plot other than they leave the river and end up in a field while stoned.

The majority of the film is people walking , staring and philosophizing. Nothing is resolved.Nothing much happens. Its kind of like just watching people hang out and not talk much. When they do talk it doesn't really add up to much- though about 50 minutes in the film has a couple of hysterical exchanges as one guy makes weird associations and Molly talks about a sexual encounter with a tree trunk.  So little happens that even at 80 minutes the film is at least an hour too long.

With the mixture of landscape shots and Phillip Glas like music the film felt like a weird Werner Herzog film ala AGUIRRE THE WRATH OF GOD, except with out the life or death struggles. There is a feel to some of Herzog's film that this film seems to mimic for no good reason.

Actually I'm still trying to determine what the purpose the film serves. Yea you've got a solid ten minutes of laughs, but what of the rest of it? I'm kind of clueless. The Tribeca material talks about coming to terms with growing older or up  and the group coming together and a bunch of other bullshit that is nowhere near being in this film. This is a bunch of friends hanging out and getting stoned. There are no revelations, or if there are we never hear them-I mean even the appearance of Molly's dead dad goes no where since once he says "I have something to tell you" the film cuts away to Molly sitting on the ground crying. Why? I have no clue.

The best way to sum up the film is probably in the line of I believe a character named Sam who says "I have something I want to tell you but I don't want to talk about it." He then adds he really wishes that we could go inside his head and see what he's thinking. I felt that way about the director of the film. I really wanted to chop off the top of his head and look into it so I might have a clue as to what sort of pretentious twaddle he was trying to sell us.

If only this film had dialog instead of looks; perhaps some more laughs sooner than 50 minutes in and had some point this might have actually been a film I could recommend. Instead I can only say avoid it unless you need sleep.
Posted by Steve Kopian at April 29, 2015