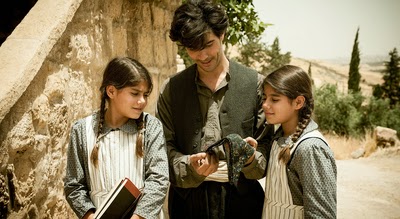 Huge scale historical epic about an Armenian blacksmith caught up in the political shifts and genocide that marked the end of the Ottoman Empire. Its a film that swings from absolutely thrilling to very silly and back again.

Nazaret is an Armenian Christian who is hauled off to be a soldier in the Ottoman's plans for the Great War. What it really means is that he is made a slave and forced to work for years in the desert. Watching the horrors of the Armenian genocide via death marches that pass by or the mass murder that he survives, Nararet constantly to hope to reunite with his family, When word arrives that two of his daughters are in alive (he had been told they were dead) he sets off to find them.

Say what you feel about the bumps in this film, and there are bumps, it always holds your attention. This is an old school style epic of the sort that used to be made in the 50's and 60's with grand vistas, casts of thousands and a soapy story. Its something that pulls you in and drags you along because you have to know where it's going. This film doesn't just go from A to B but also to a few other places as well. Where it goes isn't something you can predict but its logical which is why you keep watching.

And sometimes you don't want to keep watching. There are a few moments such as Nazaret's finding his sister in law dying in a refugee camp that will make you roar with laughter. Badly done the sequence has the poor woman looking like a George Romero zombie bleeding for a quick end. Several people in the press screening roared with laughter. I groaned.

Thankfully the film snaps back and you soon have Nazaret struggling in the desert trying to ger the hell out of dodge.

I liked this film. By no means a great film, it is a good one if you can be very forgiving.

The film has been picked up for release and will be hitting theaters soon. Because of its epic nature I do recommend you see it in a theater.