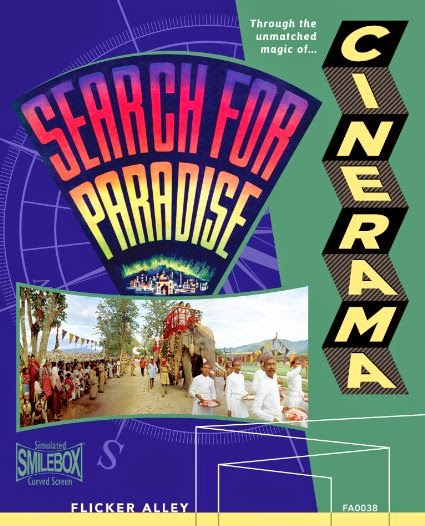 One of the more spectacular of the Cinerama films SEARCH FOR PARADISE has Lowell Thomas and two military men touring the Central Asian mountains on the way to the coronation of King Mehendra of Nepal. The idea is to explore possible places for paradise on earth.

While having more of a plot line than some of the other Cinerama films, this one feels like its a real trip, this is also the least hurried. Things happen as our guides tour the region before them.While this unhurried nature doesn't always work (SOUTH SEAS ADVENTURE is too leisurely and rambling,) here the slower pace works, I'm guessing because even though we are taking our time we are in constant motion.

The motion is supplied by several kick ass sequences such as the opening Parachute jump, the drive along a narrow road with a cliff to our right and the trip down the Indus River. Best of all is the fact that even some of the sequences lacking motion are so spectacular you appreciate having the time to just sit an take them in.

This is one of the best Cinerama films released and I can't thank Flicker Alley enough for putting it out.