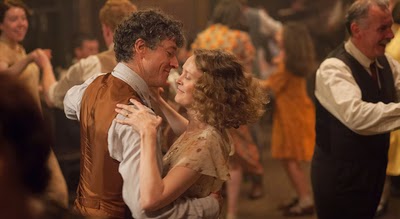 Ken Loach's latest film is based on the life of Jimmy Gralton who returns from exile in America and ends up reopening the meeting hall that got him exiled in the first place. Battling the rich and landed as well as the church who view him as a communist, Galton reforges friendships as he runs head long into troubles.

I tend to shy away from Ken Loach films. To my mind he's a filmmaker who makes serious political films that frequently can be dark.  While there is no doubt that his films are very good, they are frequently not where I want to go. JIMMY'S HALL, while very political is also a film that's very much alive and not dark.

What I like about the film is that the film is largely a slice of life. Its a film about fighting for the right to think and do what one feels is right. ts a film that is populated with great characters. Even Jim Norton's Father Sheridan, the bane of Gralton's existence, is a nicely drawn character.

This film surprised the hell out of me. It made be sit up and smile and lean in  so that I could be a conspirator to  getting the hall open.

This may not be the best film ever made, but it is a damn entertaining one.