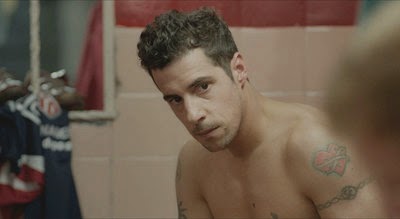 After injuring an opposing player in a soccer match  Paton is suspended for 8 games, pretty much the rest of the season. With time on his hands and little to do he contemplates his future on the field and in life.

Okay, but nothing special film is considerably less deep than I've made it out to me and unlike the official description. Much lighter than you would expect this is really just the story of a guy at a crossroads in his life, he could be in any sport or any job.

I really don't know what to say. Its a thoroughly enjoyable film that isn't really dep or meaningful. While I had a good time seeing it I was left to ponder how the film ended up at Tribeca of all places. Don't get me wrong its exactly the sort of film I'd expect at Latin Beats or some other NYC festival but not Tribeca.

Definitely worth your time if you want something undemanding, but I wouldn't go out of my way to see it.
Posted by Steve Kopian at April 29, 2015