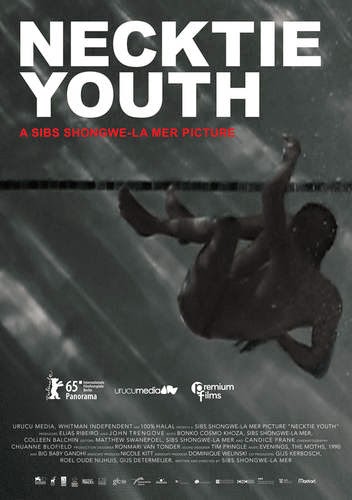 Sibs Shongwe-La Mer NECKTIE YOUTH will either thrill you or piss you off. However whether you like it or hate it odds are you'll see it as the calling card of a talented director.

The film follows two young men Jabz and September through the disenchanted suburbs of Johannesburg. Bothered by the live streamed suicide of one of their friends they try to lose themselves in drugs, drink and random acts of rebellion.

Shot in stark black and white with occasional full color memories this is a great looking extremely well acted film. This is yet another film you'll want to have hanging on your wall as if it it were a moving painting.

The problem is the film is extremely arty and very pretentious in its dialog and construction. How you react to the overly arch dialog and voice over landscape shots will determine how you feel about the movie.  I had no problem with the voice over sequences however I really was bothered by the dialog that was nowhere near natural and was always about something. While I completely agree that a director can do anything he wants with his film you do have to have a way for people to connect with whats going on on screen and here things are too artificial to really work for me.

That said Sibs Shongwe-La Mer is a brilliant director. Yes I didn't like his how the script is constructed but I completely admire that he actually gave us a film about ideas. I love that here we have a director who is willing to do make a film that has a brain behind it.  Actually I like the ideas and the issues raised I just disagree with the best way to present them. If you add in the technical achievements and the fact that he pulled such good performances from the cast it's clear that we are witnessing the birth of a great director.

I just wish he had made a film I could recommend.
Posted by Steve Kopian at April 23, 2015