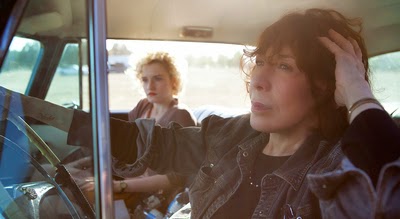 Lily Tomlin stars as Elle Reid a grandmother mourning the loss of her partner 18 months earlier. Not long after Elle throws out her new girlfriend her granddaughter shows up looking for money for an abortion. Having cut up her credit cards and paid off all of her bills she has no cash, so she takes her granddaughter and heads out on a road trip to get the money.

Better as it goes along film has a couple of great sequences that really shine. A stop by the home of Sam Elliot is so good as to rock the heavens with the fire works of great film that might have been. This is two acting pros putting everyone else in Hollywood to shame. The sparing and rawness of it had me wanting to stop the film to regroup. A late in the game coming together sequence also had me misty as everyone involved simply nailed it.

As good as the pieces are the film is uneven and ultimately disappointing. While never bad the film is painfully cliche as every buddy film cliche is employed. You know how its going to end ten minutes in and other than a momentary odd twist,or individual sequence this film is very much been there and done that.

While no doubt worth seeing you can skip the theater and just wait for home video.
Posted by Steve Kopian at April 24, 2015