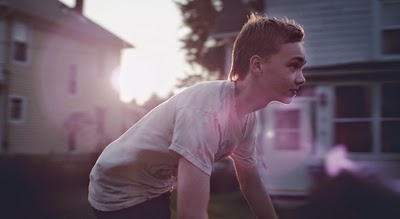 I don't think I've seen many films as emotionally truthful as KING JACK. Say what you will about the details of the plot, the pure emotion of being an teen and an underdog  made a whole theater full of critics ponder how in the world they could ever write about the film.

Teenager Jack is just trying to get by. Bullied and abused by the kids around him, and even his older brother, Jack falls in and out of trouble. When Jacks younger cousin Ben comes to stay for a couple of days, Ben's mom had a psychotic episode, Jack finds that he is now entrusted with keeping an eye on someone.

This film kicks ass and takes names. Its a film that resonates with a truth that if it isn't real in a reality sort of way, then it's certainly real in a nostalgic way. Everyone will see themselves in Jack even to the point they will have to look away. I saw whole sections of my childhood flashing before my eyes, both on screen and in my imagination. It was tough, but well worth it.

I really don't know what to say other than I loved this film a great deal. Its a film that talks to you, whoever you are, on your own terms. The filmmakers know of what they speak and it's all on the screen. In truth KING JACK is the real BOYHOOD. There is more truth, more emotion, more reality than Richard Linkletter’s film

The truthfulness is so strong and so powerful that you easily forgive some of the odd twists and turns, especially a villain who is so nasty  that you really can't imagine him not being in prison. Then again I'm not sure that the film would resonate as well as it does if it wasn't bumpy and didn't have monster for Jack to struggle against.

Go see this film and be moved to actually feel something.

Something tells me that this film is going to have a long life after Tribeca. A must see.
Posted by Steve Kopian at April 18, 2015