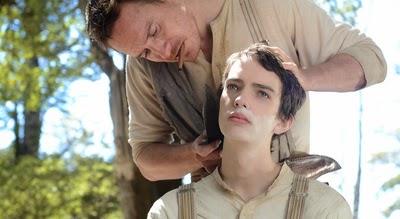 Wonderful small scale western has a Lord,Kodi Smit-McPhee, from Scotland traveling across America to find his lady love. Along the way he meets gunman Michael Fassbender volunteers who to help him find the woman.

Utterly delightful and strangely moving western is a small wonder. It looks great,  has endlessly quotable dialog and doesn't do what is expected but always feels perfectly right. Add to it a cast that gives great performances across the board and you have a great little film.

I love this film a great deal. It was a film that blindsided me. I have no idea what I expected going in but it wasn't finding a near perfect gem.  If you want to blame some one for the delights of the film take aim at Michael Fassbender who is absolutely charming as man of seeming questionable morals. He is wonderful in what may be his lightest role to date.

Looking over my notes I have all sorts of notes about the themes and ideas kicking around in the film but to be honest none of it matters-not because its not there, rather because its so entertaining.  At some point I'll write about them,  but for now I just want to see the film again because its just so damn good. Put this on your must see list.
Posted by Steve Kopian at April 20, 2015