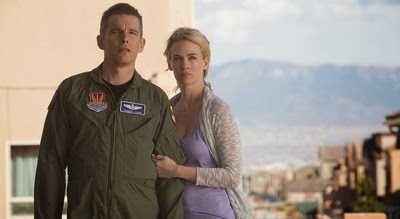 Ethan Hawke plays a air force pilot who is reduced to flying drones half way around the world from his targets. As the up close world away killing gets to him, his marriage crumbles and he's forced to question what he's doing

Wildly over long, cliched filled film is effectively over ten minutes in as actor Bruce Greenwood delivers a speech to a bunch of new recruits that lays out the entire premise and thematic landscape of the film. Its states everything the film is trying to say so well that what follows is completely redundant. What makes sitting through the remaining 90 minutes so difficult is the actual plotting that includes the badly handled failed marriage gambit, an evil CIA villain, a possible office romance with another pilot and a reoccurring rape on the far side of the world subplot (what is that doing here?). What were they thinking?  (Actually what was Ethan Hawke thinking because he usually knows better)

I was ready to walk out early on but hung in there hoping something exciting would happen. It never did. My smart ass cheer when the film ended brought giggles from the people around me,

Avoid this one- even if you are anti-drone because with films like this you're liable to lose the battle for hearts and minds.
Posted by Steve Kopian at April 29, 2015