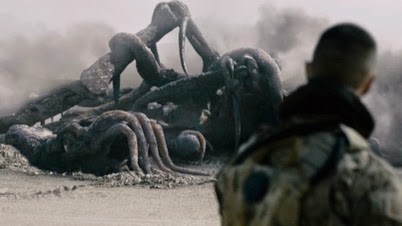 Kill all expectations. Forget anything you think you know about the film. Wipe away any and all ideas you have if you want to have any hope of engaging with this film. Though to be fair if you're looking for man on monster battles from start to finish just stay away, you're not going to get it.

Largely sequel in name only to 2010's MONSTERS is set ten years later. Where in the first film the infestations of alien beings was confined to a strip of land that split the US and Mexico, here they have spread across the world. Mankind has sort of learned to live with the aliens. As in the first film the creatures are largely kept to the background, there is only an occasional interaction. The real story here is one of war and its a commentary on the Wests assault on the East and people that aren't like them.

Set in  an unnamed Middle Eastern country the film follows a group of soldiers as they go on a rescue mission to find five soldiers who disappeared deep in a monster infected area. What happens is the film.

I am not sure why the monsters are in this film other than acting as a kind of allegorical Greek Chorus about the West's desire to kill that which is alien to it. I don't know if they really have a purpose. Yes they look cool, yes they allow for a couple cool sequences and lots of cool monsters, but as has been pointed out you could chop them out and it wouldn't make that much difference to the film. I could probably make an argument that they are distracting from the rest of the film.

The rest of the film is a good, if slightly unremarkable war film. The problem isn't so much that the story is bad, rather the film doesn't do a much with the cliches of Americans at war in the Middle East that it uses as a kind of short hand. We've been here before any number of times before in films and on TV. It helps a great deal that the action sequences are expertly staged and films.

Everything in this film looks great. The monsters, the battles the scenery. It all looks spectacular. Even when the plot wasn't fully engaging me the look (and the monsters) of the film kept me watching.

How is the film itself?

I'm not entirely sure. I think the film is definitely worth seeing-so long as you don't expect a monster movie.  Beyond that I'm not completely sure. That's not a joke, that's not a cop out, that's the truth. The trouble for me is that the film feels so completely alien to me even after two times through. It feels like a war film but the aliens  just being there makes it feel like something else. The result is I'm still trying to suss out what I feel about it.

My recommendation is that you should give the film a shot if you're willing to be open to what the film is. You have to be willing to go into the film and have your expectations upset-even if that means seeing a film you might not like. Then again this very well could be your next favorite film.

Currently on VOD and pay per view the film hits select theaters Friday.
Posted by Steve Kopian at April 13, 2015