LOVE CHILD plays November 9
Heart breaking story of Sahand and Leila who flee Iran for Turkey with their son because their adulterous affair potentially makes them eligible for the death penalty. We watch their relationship over several years as they struggle to earn a living and get a status that will not result in their being sent back to Iran. I was not really interested in LOVE CHILD going in but very quickly I was drawn into the plight of the couple and their son. I sat on the edge of my seat for the entire two hours, mumbling angrily at the end that "you can't leave it there"...but life isn't like a movie.
A great film. Recommended. 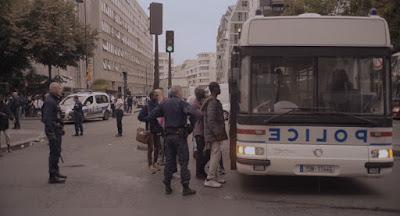 PARIS STALINGRAD plays November 9
The plight of the refugees camping out in the section of Paris known as Stalingrad. Following several asylum seekers, as well as the camp itself, we are in the thick of things as they try to get the papers that will allow them to stay all the while battling the police and the bigots who want to move them elsewhere. A huge number of bonus points for directors Hind Meddeb and Thim Naccach and their crew for not only recording but challenging the powers that bee several times on behalf of the people being abused. This is the sort of reporting that American journalists should be doing about our own abuses.
One of the best and most vital films at DOC NYC and as such highly recommended. 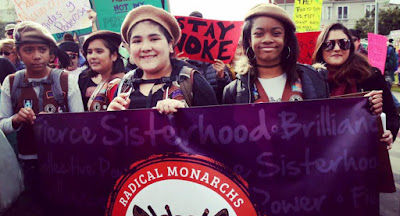 WE ARE THE RADICAL MONARCHS plays November 9
When the local Girls Scout troop was found not to be focusing on social justice issues the way two moms thought they should, they started their own organization in order to teach their girls to fight the good fight. Glorious portrait of a group of girls and their moms who are fighting the good fight. This is a hopeful look at the net generation of social justice warriors who are going to change the world that we all live in. Showing the good that the girls are doing, and not shying away from the misguided hate thrown their way (some people don't like the idea of kids fighting for social causes) the film will give you hope that maybe things can be fixed and that change will come. THis is 100 minutes with great people.
Highly recomended.
Posted by Steve Kopian at November 06, 2019