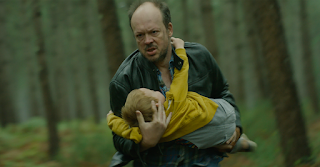 Worker in a factory set for closing kidnaps the directors 2 year old in the hope of having a bargaining chip.

Beautifully made film told from the point of view of the child. We only see and know what the child does. To be honest I don’t know if it wholly works, I think largely because the beginning of the tale is rather jumbled as we become acclimated to the child’s POV. One things gets going the film clicks, however the fact that this is a short kind of works against the film which is really a bit too short for the telling. Personally I would love to see a longer version of this because there is a great story here.

Regardless if you run across this film on the festival circuit it’s worth a look.
Posted by Steve Kopian at November 03, 2019