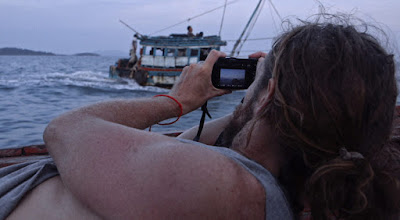 Portrait of investigative journalist, Matt Blomberg, and ocean activist, Paul Ferber, as they struggle to battle the illegal fishing that is rampant in Cambodian waters. The waters are being dangerously over fished by Vietnamese and Thai fisherman who cross into their territorial waters because they have over fished their own  waters to the point of destruction. Things are so bad that in order to make a living many Cambodian fisherman are using illegal methods to to make ends meet.

This is an eye opening film that runs out of steam about half way in. The problem is that we can be told how bad things are and shown similar images of the destruction and boats illegally fishing. While everything is choice there is a point where there stops having real forward momentum and interest wanes. Its a shame since the film has some real power that either a trimming down or restructuring could bring out.
Posted by Steve Kopian at June 02, 2020