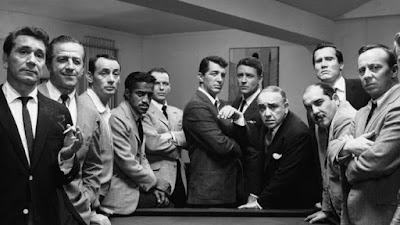 Lewis Milestone’s Ocean’s Eleven is precisely as meat-headed as one would expect of a Rat Pack vanity project. The story of eleven former 82nd Airborne paratroopers banding together to rob five Las Vegas casinos on the same night, the film is shameless in its pandering to the egos of its legendary coterie of entertainers. The actors all play thinly veiled versions of themselves: Frank Sinatra is a smooth-talking lady’s man with the plan; Dean Martin is the droopy-eyed crooner and voice of reason; Sammy Davis Jr. is the enthusiastic yet dignified can-do go-to; and so on and so forth. (The most entertainingly on-the-nose doppelgänger is Peter Lawford’s Jimmy Foster. Lawford—an actor more renowned for his family connections to the Kennedys than for his talents—plays a spoiled mama’s boy whose “day job” consists of asking his parents for spending money.)

Predictably, the film is sickeningly misogynistic: the women are all either arm candy, strippers, masseuses, or shrill harpies. Even worse are the scenes where Sinatra & Co. joke about repealing women’s suffrage and making women their “slaves.” Even though these moments are explicitly depicted as buddy-buddy kidding…yeesh.

Yet the film has two things that liven up the macho myth-making. The first is the actual heist scene which surprisingly channels many of the same pop art sensibilities Saul Bass used in his animated title sequence: quintuple film exposures of all five casino signs simultaneously winking out during a planned power outage; geometric camera compositions amidst crowded casino floors both in the light and in the dark; unearthly fluorescent footsteps trailing the thieves from the vaults. But this is all cinematic eye candy.

What truly makes Ocean’s Eleven unique is how it serves as an autopsy of the Greatest Generation’s self-mythology. By 1960, the Rat Pack were largely in their mid-to-late forties, and they must’ve known that their time in the spotlight was nearly over—the scene of Martin jamming with vibraphonist Red Norvo now seems positively quaint knowing that elsewhere rock music was well into the initial stages of world domination. In hindsight, the film seems like one final, definitive assertion of relevancy on the part of its participants. The fact that it ends with an out-of-nowhere downer conclusion makes this attempt all the more tragic. Their moment had past. It was the boomers’ world now.
Posted by Steve Kopian at June 02, 2020