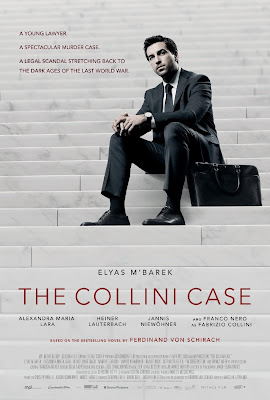 Franco Nero plays Collini, an elderly Italian man living in Germany who goes to see a rich industrialist, nominally for an interview or a paper. In fact he is there to kill the man. Charged with murder Collini is assigned an inexperienced public defender. As the attorney blunders through the early part of the case he soon realizes that there is more at stake than simple murder and the motivations for the killing go back 60 years to the Second World War.

I'm going to pause here and say that THE COLLINI CASE is an excellent courtroom thriller and you should see it.  However because I can't say more than that without discussing several points that maybe considered spoilers, so if you don't want to know stop reading and go see the film when it hits VOD June 5. If you don't care, then keep reading.

Taking a typical set up and blowing it to hell, THE COLLINI CASE excels because the film really isn't a mystery despite being sold as one. The truth of the matter is this is a damning look at the sins of our fathers and our older generations and it forces us to ponder at what point do we stop caring and say that crimes against humanity are not something we will look into. Collini has killed a man because the German justice system decided it didn't want to deal with crimes against humanity any longer.

The novel that the film is based on was written by Ferdinand von Schirach who did so to come to terms with his grandfather who was a leader in the Hitler Youth. von Schirach was haunted by the sins of his family and had to do something to explore them. In this case he called the German justice system in question with it's complacency about war crimes starting 20 years after the war. The question of should we ever stop prosecuting the crimes, especially when the criminal is rich and powerful was something that he rightly felt needed to explore. In the film the actions of the victim and the lack of interest by the criminal justice system is a pivot point for the plot and it is riveting.

Despite the fact that this film is about the German legal system the question of accountability for crimes against humanity is an important one. In a world that frequently slipping into barbarism it is a question we need to consider with horrific crimes still occuring in the Balkans, in Africa and even  in the US.  Should we pursue justice regardless of who committed the crime and when? THE COLLINI CASE forces us to consider that question.

A beautifully crafted film, director Marco Kreuzpaintner and his cast expertly take what could have been a by the numbers film and made it into something truly compelling.

I was rocked. If you care about justice you will be too

THE COLLINI CASE hits VOD June 5 and is highly recommended.
Posted by Steve Kopian at June 02, 2020