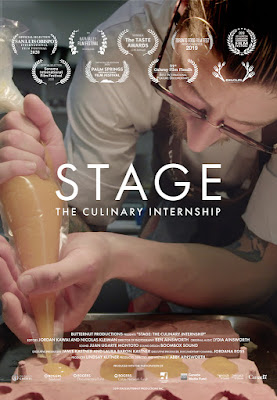 1,500 chefs apply for one of 30 spots to apprentice at Mugaritz. Owned by Andoni Luis Aduriz it pushes the boundaries of where art and food are. Dishes have names like Penicillin and Apples or are made to look like a used condom. Those that survive the initial nine months have a shot at going on and making dishes of their own.

STAGE didn't click with me. Normally I am a food film guy and this film just remained arms length from me during it's whole running time. Part of the problem is that the film doesn't really explain a great deal. There is an assumption that we know what Mugaritz is and who Andoni Luis Aduriz is and what he is doing at his high end restaurant. Considering that Aduriz is the reason that most of the people were going to the program I find it odd that he largely disappears for most of the film and we get no sense of who he is or why anyone would want to learn from him. Like wise the restaurant and the food served, we get a vague idea of what it is before we are off to the races. Basically there is only a couple of lines before we are dropped into the kitchen with the apprentices and left to fend for ourselves. While we do catch details along the way, there is always a sense of missing something. I needed to know a bit more about the whole program and it's founder so I said "ah ha" instead of "huh?"

It also didn't help that the whole look of the film and everyone in it is absolutely perfect. At no time does anyone look even remotely out of place- even in their off moments. It is kind of scary and like much of the look of the rest of the film the absolute perfection creates a strong sense of unreality.

STAGE is currently playing as part of a virtual cinema program. Details on how to watch can be found here.
Posted by Steve Kopian at June 02, 2020