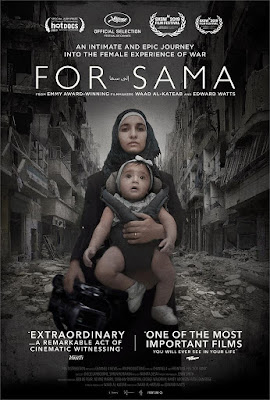 After months and months in and out of theaters and having run on PBS I finally caught up with For Sama and all I can say is – it’s even better than everyone told me.

The film is the video record that director Waad al-Kateab made for her daughter explaining the choices she made. The filming began in the 4th year of Aleppo University where she was studying economics. It was the time of the Arab spring and the revolution in Syria was just starting…it was quickly followed by the horrific crack downs and massacres. al-Kateab kept filming as a way of documenting what was happening since the Syrian government was trying to squash the story. As the struggle amped up she still kept filming, even as she fell in love married and gave birth to her beloved Sama. Eventually she took the footage and assembled it as a means of explaining to her daughter why things happened the way they did.

I don’t have a great deal to say about the film. Its not for lack of words, but more a combination of things. The first is that at this point so much has been written about the film that my words are pointless. There is little if anything I can add other than perhaps this is one the few times that that raves for the film simply don’t do the film justice. Having seen dozens of films on the struggles in Syria this is the most real and the most human. I suspect that the fact it is simply focused on life as it was lived speaks more than one that is focused on the White Hats, the reporters or the battles. I was rocked back on my heels in the best possible way. By the end I was tearing up with the final photos damn near wrecking me.

The other reason I don’t have a lot to say is the film speaks for itself. Some films are better to just see. This is a life lived and my words can not match the experience of living it. I mean you don’t want my words explaining what it’s like to ride a rollercoaster. Even if I got the words exactly right it would still be no match for the sick feeling in your gut on that first drop.

FOR SAMA plays at DOC NYC November 10 and 11. For more information and tickets go here 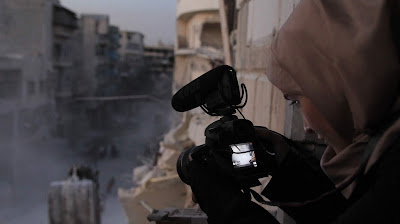