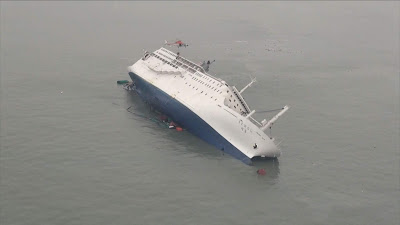 I am thankful I didn’t see In The Absence on the big screen at DOC NYC because I don’t think I could have stood it. The film is a soul crushing account of the sinking of the ferry Sewol off the coast of South Korea told almost entirely in video footage of the sinking timed with audio recordings and text messages occurring at the same time as what we are seeing. It is as soul crushing an account of a tragedy as you can get. (No that’s not true, I’m guessing it could be worse but I don’t want to see that version)

Playing at DOC NYC as one of the Oscar Short Listed Shorts it’s one of the few films that rightly should be in the running for Oscar gold. To be certain the other films are good, but there is something about the visceral impact of watching something happen in “real time” that ups the ante. Watching the film I found myself wanting to scream “just tell them to get off the ship- just tell the kids to get off now” but my doing so wouldn’t have helped anyone – besides I knew no one did. Everyone waiting for someone, any one to make a decision. (and lord knows it wasn’t coming from President Park who spent the day in bed oblivious to the seriousness of what was transpiring.

This is a masterpiece of understated power. This is simply video of what happened during and after mixed in with a few interviews which fill in the things that the videos can’t show.

Highly recommended, this is easily one of the best films at DOC NYC and of 2019. If things blow the right way this film should also be heralded as a classic of it’s type. Go see it.

In The Absence plays Tuesday November 12th at DOC NYC.  For tickets and more information go here.
Posted by Steve Kopian at November 05, 2019