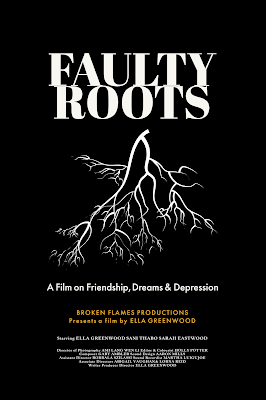 FAULTY ROOTS is the story of Lola, a teenage girl who is struggling with depression. In an effort to help pull her out of her depression her mother reconnects her with Zack, an old school friend who is dying of genetic disease.

Writer director Ella Greenwood has made a solid little film highlighting the problem of teenage depression. Greenwood manages to translate what it feels like right. You really can’t just turn off the feeling of being “down” on a whim. I like that she explores the complexity of that feeling. And while I can quibble about a choice or two toward the end, my only real criticism of the film is that while Greenwood translates what it feels like correctly, she stages some of the discussions between Lola and Zack a little too artificially. It feels like tableau and not the meeting of a friends. It is ultimately a minor flaw since the discussions between them is the important thing and they are very good.

And the discussion is what is needed. Too many people don't understand depression because they have never felt it or were exposed to what it can do. Greenwood's film makes us experience it.While the film isn’t and never was intended to be the grand final discussion on the subject of teenage depression,hell it is only ten minutes long, it is an excellent place to begin talking. Hopefully the film will get both adults and teens talking about what they are feeling and what it feels like on both sides of the equation.

FAULTY ROOTS will be playing at festivals throughout 2020.
Posted by Steve Kopian at March 03, 2020