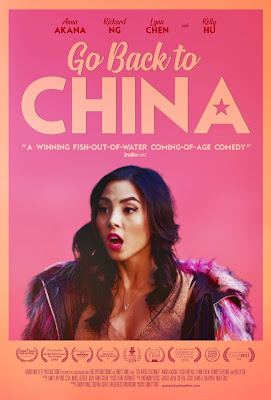 Emily Ting’s second film after ALREADY TOMORROW IN HONG KONG is a sweet little comedy about a rich young woman who blows through half her trust fund before being cut off by her father. Given the choice of making it on her own or going to work for her father in China she opts to go to China and runs headlong into a life she never imagined and family she never knew she had.

I like Emily Ting’s films. In her two films she has shown the ability to take certain formulaic plots and turn them to her own ends. In ALREADY TOMORROW she took the basic plot of hanging out during a the long night together of potential romantic partners (ala the BEFORE films) and spun it into something fresh and unexpected and in GO BACK she takes the spoiled rich kid forced to do real work and colors it ways we really haven’t seen before. The result are films that may seem like been there and done that when you go in, but which are films you want to share with anyone you know who loves a good movie.

Bumping up GO BACK TO CHINA’s plotline aside the real reason I like a great deal is one of the things that Ms. Ting does exceedingly well and that is she creates characters that are not cliché. Anna Akana‘s character of Sasha Li while very much the spoiled rich kid, she isn’t cliché. There is way more going on around her than just yelling and screaming and spending money. Additionally the people around her are not plug and play. Richard Ng as her father is most certainly often a sweet old guy but you get a sense of there being much more to him- how could their not be when he has had multiple wives and many more children. Ting is a master of creating characters that are very much like real people we know and as such we become that much more invested in what is going on on screen.

Hitting theaters Friday GO BACK TO CHINA is a sweet little film. Not only is it an enjoyable little comedy that is worth your time, but it cements Emily Ting as a director to watch.
Posted by Steve Kopian at March 02, 2020