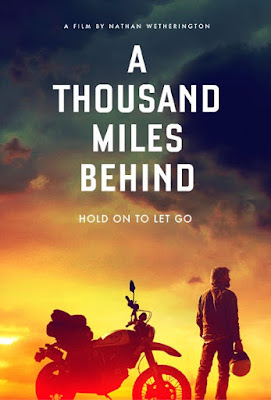 Preston's wife and daughter are killed in a car accident. Lost he doesn't know what to do until he is gifted with a motorcycle and he heads out on the highway and begins to heal.

Beware any film when one of the selling points is the mode of transportation at the center. I say this because I got an email touting this film as showcasing the motorcycle used. That isn't a good sign.

To be fair A THOUSAND MILES BEHIND isn't a bad film. It's simply one we've seen a thousand times before. We've seen this story of a person reconnecting with life enough to know the rhythms. This one goes quietly.

The real problem with this film is that the filmmakers think that long silences mean something. And in the right hands silence can be a killer thing to use, but here long stretches of the film go by with Preston not saying anything. Most of the first third doesn't have a great deal of dialog and is just Preston moping. It wears thin really fast since we keep waiting for something to happen. It might have worked had the film not ultimately followed an expected path, but the film hits all the notes and we're left wondering why it took so long to get going.

Once the film gets going A THOUSAND MILES BEHIND actually works. Once Preston speaks and interacts with other characters the film comes alive so much so that if  we could have had a real character kick in sooner we could have a great film instead of just a good or okay one.

Ultimately I liked the film enough to say give it ago if you are willing to deal with a slow start.