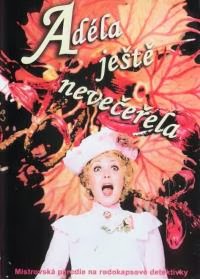 As films come and go to the We Are One Global Film Festival I somehow missed this smal, largely forgetten in the US charmr is going to be playing the fest on the final two days, June 6 and 7.

A key film in drawing me into the film world, despite not seeing it for 30 years after I first saw commercials and clips, ADELE is the sort of film that they really don't do any more. Partly because the form is out of favor, but mostly because what is being sent up or loving kidded is out of favor. I say this because I got an email after this review ran in 2014 to ask who Nick Carter was. (The short version: he is a pulp detective who kind of rivaled Sherlock Holmes in popularity in America and who had hundreds of stories written about him and had a series of stories spun off about his son. There are movies, radio shows and TV programs about him)

This is a great deal of fun and highly recommended - though be warned it goes up at 625PM on June 6th and will be down when the festival ends the next day. (Details here)

Nick Carter goes to Prague to help the police with a missing persons case and promptly runs afoul of an evil botanist with a man eating plant.

I remember thirty years ago when this movie came out in the US seeing reviews on the local TV station that made me want to see this film. The limited release it got prevented me from doing so, as did the complete disappearance from TV and video. Still the idea of that hungry plant had haunted me for three decades while many other "must see" movies came and went. Thanks to stupid luck I stumbled upon a copy of the film and I have to say that I was not disappointed.

This is a jokey send up of the pulp thrillers from the turn of the twentieth century. It takes one of its greatest heroes, Nick Carter and plays with everything that makes the pulps so much fun. Here Carter is called into action and using a variety of wild inventions he takes on a villain that is very much of the "boo hiss" Snidley Whiplash, mustache twirling variety. Its just a fun movie done in the style of stories that haven't been in vogue in a century. No big belly laughs but lots of chuckles and plenty of smiles.

If you want to see a good little film, thats probably all but forgotten now, you'll need to search it out. Its not going to be the be all and end all but its a neat little gem to add to you list of film treasures.
Posted by Steve Kopian at June 03, 2020

Email ThisBlogThis!Share to TwitterShare to FacebookShare to Pinterest
Labels: czech republic, mystery, satire, We Are One