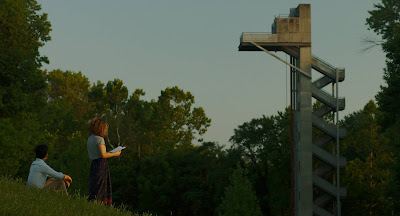 It’s odd to consider given its inescapable ubiquity, but architecture might be the most under-appreciated art form amidst the popular consciousness. How often do normal people stop and meditate on the design, beauty, or functionality of the homes where they live, the buildings where they work, the churches where they pray, even things as mundane as the overpasses they drive through on the way to the supermarket? (And for that matter, what of the supermarkets themselves?)

For his first feature film Columbus, video essayist Kogonada wanted to make this neglected art form the fulcrum upon with everything else pivoted. His reasoning was his belief that “architecture is the structuring of emptiness,” and indeed, the film’s emphasis on physical space perfectly reflects and refracts the emotional distance and turmoil of its characters. Consider the first scene where the two protagonists meet and talk. Kogonada positions them on opposite sides of a fence, their talking strained as their literal separation mirrors their figurative distance. When they finally break through to each other, they come to a gate, allowing them to cross the physical barrier just as they crossed their emotional one. It’s a brilliant bit of filmmaking, and it’s only a relatively minor flourish on Kogonada’s part.

Columbus isn’t just a great movie, it’s one of the most auspicious directorial debuts of the last decade. The plot follows the friendship between two lost souls in Columbus, Indiana. The first is Casey (Haley Lu Richardson), a high school graduate obsessed with architecture who’s put off her dreams of college to nurse her drug addict mother. The second is Jin Lee (John Cho), the estranged son of an esteemed Korean architect who fell into a coma while visiting Columbus for a lecture. Both want to escape their filial duties to pursue their own dreams, but neither can work up the nerve. Slowly, the two begin to console each other with architecture, visiting the modernist landmarks around the city as a pretext to open up about their lives.

It sounds simple, but Kogonada plumbs shockingly complex depths of doubt and regret, fear and alienation that take most filmmakers decades to discover. Part of this is due to the buildings themselves, so lovely yet austere, so playful yet stern. The highest compliment I can give the film is that it made me want to buy a bus ticket to Columbus to see these marvels myself.
Posted by Steve Kopian at June 06, 2020