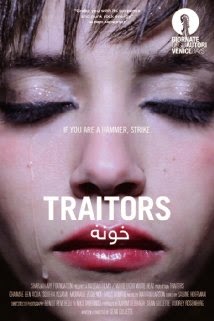 Malika, lead singer for an all girl punk band in Morocco, has to get money to pay for studio time after a big name producer agrees to produce their demo. After running into various dead ends she decides that perhaps the only way to do it is to make a drug run into the mountains for quick cash.

There is very little to say about this film except its a damn good little film. Starring Chaime Ben Acha in what may very well be a role to super stardom this is a film that grabs you from its first moments and then just goes straight on to the end. Its a just a tense little film that makes you wonder how this is all going to play out.

If there is any flaw in the film it's that the film kind of suffers from a true sense of danger. For whatever reason, despite the fact that you want to know how it's going to turn out, you really don't think that Malika is actually going to die. There is something about the tone of the film that keeps things a couple of degrees lower on the tension scale.

Definitely worth tracking down.
Posted by Steve Kopian at April 21, 2014