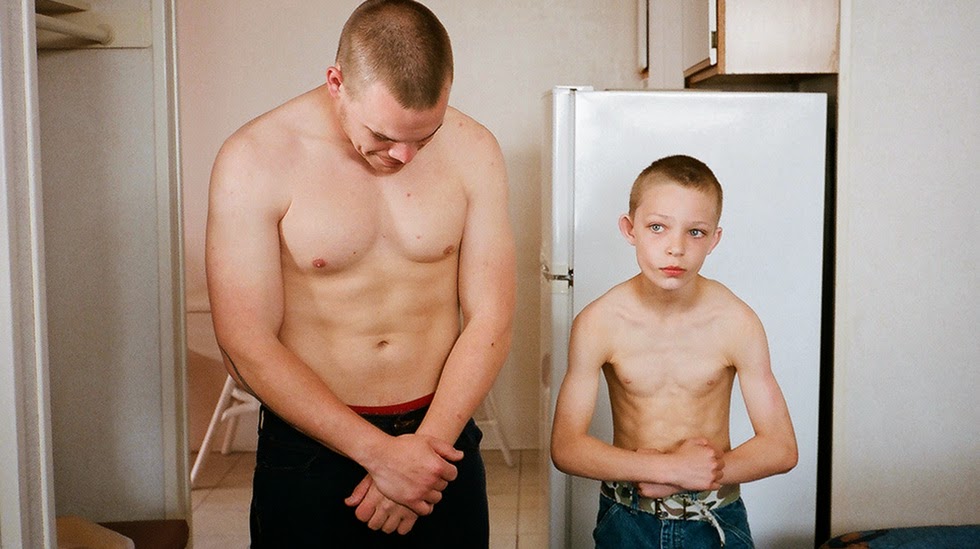 I really felt myself absorbed from the outset of this film, even as I felt its off kilter path would surely be losing people along the way. An austere gray sky over open fields of wheat and tangles of forest held a natural melancholic beauty and a quirky sense of humor was quickly established as we’re given a majestic view of a toilet sculpture towering in the sky. I was hooked. But as time wore on, my patience wore thinner, as its narrative progresses at an even more meandering pace until it literally goes too far into the woods. Intriguing visuals and an affecting sense of lacking purpose remained, but did not stand out enough in the end among other confusing elements to leave me a fully satisfied viewer.

When we meet the film’s central figures, the two brothers (Older and Younger) wear piercing expressions of boredom and restlessness, walking along a path armed with an air rifle and a baseball bat. They proceed to wreak havoc on an abandoned car, the camera steadily taking it all in, unconcerned with the inordinate amount of time being spent.

Their next steps stirred feelings of amused fascination., leading to some interesting notes: It’s like Harmony Korine’s Gummo gone good, I must have thought, keeping the sense of outsider disconnect, like Older walking around in collegiate wrestling headgear, but doing away with all the excess pretentiousness. Another scribbling suggested it could be an art-house inflected Jackass, as the pair took air rifle shots at a couple of girls racing all terrain vehicles through nearby valleys. It evoked the same feeling of senseless mischief born out of a youth culture with nothing else to do. And the ensuing wrestling match between the four held a similar excitement of unpredictable chaos carried out by kids on the fringe of society’s norms.

This is where the seeds of a narrative begins to sprout. The collision ends in one of the girls suffering apparently fatal wounds and the boys taking flight. Their mother finds where they are hiding out and brings them some necessary items so that they may flee, setting in motion a very bizarre road trip, filled with awkward stops and starts.

Along the way they come across family, whom they are soon spurned by for the cloud of chaos they seem to bring with them, and a few other individuals, dealing with their own forms of disconnect from physical spaces they seem powerless to move away from. A French-speaking maid at a hotel they stop at takes to the pair immediately, flirting with the older and telling of her relationship with an obsessive chef who would kill her if she ever betrayed him.

They end up at a large mansion along the coastline, where they meet a caretaker who is expecting them. The boys take up lodging with him on the grounds of the house, but are instructed not to go inside, and engage in talk of survival and the man’s war experiences, himself being a veteran of the Vietnam War.
The veteran is an interesting character, but at this rather late stage in the game, takes a large focus away from the boys and onto himself. He either becomes something of a father figure to the two brothers, or perhaps he is their actual father; it is never clearly shown. After passing a vaguely uneasy time together, they engage in a reenactment of the Vietnam War, the boys becoming only somewhat cognizant participants in this ritual that seems to hold great but impenetrable significance to the veteran.

From its obtuse narrative to the inscription at the end of the film, one can easily draw the conclusion that this is a deeply personal film. How much films like this owe an audience in elucidating its point is a question that will probably always be open to debate. On the one hand I feel grateful for films like this that challenge our sensibilities and stretch our ways of perceiving. I’m reminded of an Indonesian film shown at Tribeca a few years ago called Postcards from the Zoo. It left a great deal of mystery in its wake and, like Young Bodies… was nearly impossible to imagine receiving a theater release.

Rather than leave me with the reaction of ‘ok that was another example of ‘x’ genre of film’ this left me with questions I genuinely hope to see answered further down the line: Do Vietnam War reenactments, such as the one portrayed here really take place and if not, from where was the idea for it spawned? What was the relationship between the director and his father, and did that in fact inform the interaction between the main characters and Vietnam Vet. And as for the actor who played him, what background does he bring, as he seems to have been made for this very particular role?

There were some truly picturesque moments capturing a sense of spiritual immobility within a wide expanse of space. However, while my curiosity was activated, the abrupt changing of gears in the narrative and overly long loitering of scenes near the end for which there is very little sense of a build to took, I was left without the magic of initial discovery and wonder one might hope to find such a film.

YOUNG BODIES HEAL QUICKLY screens Wednesday the 23rd, and Friday, the 25th. Click here for more info and to buy tickets.
Posted by mondo_curry at April 22, 2014