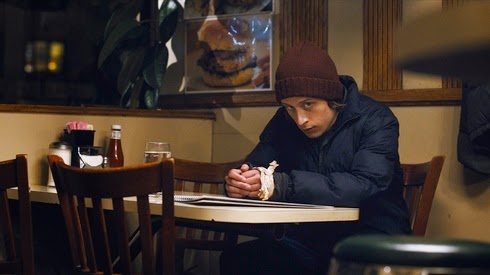 The reason to see Gabriel is to see an amazing piece of work by Rory Culkin in the title role. Culkin is scary good in a role that should win him tons of awards.

The film opens with Gabriel...er Gabe, no one is supposed to call him Gabriel, on a bus. He's going somewhere, it turns out that he's looking for a girl named Alice. The trouble is that his information is several years out of date- worse he's not suppose to be there, he's suppose to be heading home for a weekend with the family.  Gabe eventually makes it home, but by that time we in the audience know something really isn't right with Gabe. Over the course of the next 90 minutes we find out how wrong things are with Gabriel who seems to have inherited his fathers madness All we can do is watch how far he takes his obsession  with finding Alice, his one true love.

Okay, I'm going to spoil something, this isn't a horror film, there is no blood bath. Yes things go really off the tracks, but this isn't a psycho killer film. This film is a drama about a very damaged young man. There are no bodies, despite a score that frequently impliesthere may be one soon.

Almost... something... great maybe. No it isn't a bad film (though the continuity errors involving amongst other things the weather and the layout of New York City are distracting), its kind of a good one. The trouble is that the film is kind of a foregone conclusion, you know how its going to end, unhappily but all you can do is wait for things to play out. Watching the film I was loving the cast and the performances, but at the same time I didn't know why I was watching this because outside of Culkin's stellar (and I do mean stellar) performance. There isn't a great deal new here, and it follows a predictable pattern. Okay yes the finale is quite good and unexpected, but beyond that you've been here before.

Should you see the film? If you want to see my early pick for an Oscar nomination for Best Actor, you should. Actually even with the feeling of having been there before you won't regret seeing it, this is ultimately a good film with a truly great central performance.
Posted by Steve Kopian at April 19, 2014