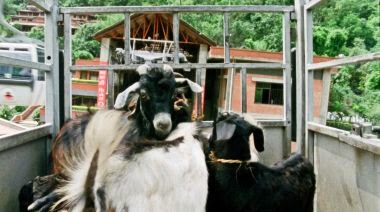 I originally saw this film at last years New York Film Festival and was mixed about it. (my original piece is here). I originally was distance by the sameness of  it and I walked out. I then had several conversations that made me wonder if I should have stayed to the end. With the film's appearance at this year's Art of the real I had a second chance to see it.

The second go through I was much more forgiving and I found I liked it much more.

The film is a series of  trips up and down a mountain via cable car. The camera is locked in place and we watch a series of pilgrims go up the mountain  in the first half of the film and down in the second. The film is frequently hypnotic.And enlightening though I still freaking hate the goats.

While I like the film a great deal I have to agree with several other writers who took the structure of the film to task in that why must we see everyone go up in the first half only to see everyone come down in the second? Its a weird choice and while is makes the film kind of like being with them , the frequently lack of talk in the first half makes interest wax and wane depending on who is in the car.  The second half where the returning pilgrims discuss what they've experienced is much more engaging and that will be the part I watch when I get this in Bluray down the road.

Recommended when the film plays tomorrow at Lincoln Center. For tickets and more information go to the festival website here.
Posted by Steve Kopian at April 11, 2014