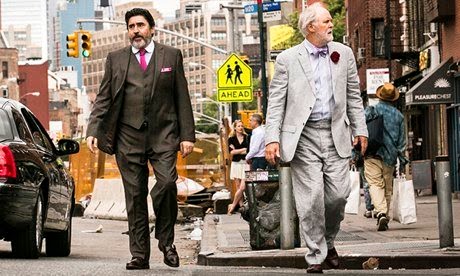 John Lithgow and Alfred Molina are a long time gay couple who decide to make it official and get married. The trouble is the marriage puts them on the radar of the Archdiocese of New York where Molina works. Fired for not following Christian teachings the couple suddenly find that they can no longer afford their apartment. This then sets them on the road to try and stay afloat and a couple.

Across the board great acting is the reason to see this film. Lets face it the pairing of Molina and Lithgow is truly amazing and worth the price of admission alone. This is two acting titans giving a masterclass which causes everyone else in the cast to try and be on their level and they mange it wonderfully.

The trouble for me was that the film was very much trying to be about something. It aches with self importance and I wanted to smack the director who fills each frame with meaning. Someone I was talking to after the press screening compared it to a very serious popular novel that keeps showing  how high brow it is by its overly clever word choices. Here the film's key offender is a score that sets the serious mood and never allows things to lighten  Jokes are told, humorous things happen but the score chops the legs out from under it.

In it's favor all the people I spoke with said this is the sort of film you either love or hate- and anyone who loved it could see how people hated it and vice versa. As a result I'm going to say if the film intrigues you give it a shot otherwise stay away and save your pennies.
Posted by Steve Kopian at April 24, 2014