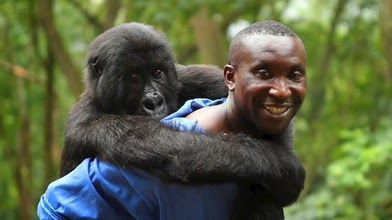 Documentary looking at the problems in Congo affecting the Virunga National Park. The park is the home to some the last remaining mountain gorillas and its also recently been discovered to be the possible location of oil.  The film follows the events that transpire as the British company Soco comes into the country and attempts to exploit the rsources and the various rebel forces attempt to make a play in order to take the government and thus the resources for themselves.

I will not argue that this may very well be the most beautiful film at this years Tribeca. The images are stunning and the images of the gorillas iin the wild are sure to win them a great deal of support...

...unfortunately the rest of the film is a very big mess thanks in large part to the six or seven listed editors. How can any film have so many people editing it? How could it not turn out to be utterly unfocused?  The mind boggles.

The film begins with a history lesson regarding to the Congo. Its a lesson that is over much too quick and leaves out a great deal of history. Its an attempt at context that never really materializes.

After that the film takes several different tracks as we follow a young French journalist, a park ranger who cares for orphan gorillas, the head of the park and a few other characters. We watch as they try to deal with Soco trying to buy their way into the reserve and the rebels trying to take over the country. There are videos of clandestine meetings, trips into the bush, battle scenes and lessons on the past deals of Soco. The problem is that the film bounces between them somewhat randomly. Worse it never completely links them up the way they should. Who is doing what and how are they all connected is never fully explained.

For me this was a long haul and I had trouble remaining upright and awake. There is a scribble in my notebook that this is constitutes the longest 90 minutes of the festival.

Why couldn't this have been reported by someone like John Pilger who could have made it all make sense?

I know that one woman was sobbing at the end of the press screening and several others were moved. I'm not arguing against what the film is saying is bad or wrong only that they film makes its point very badly. I do not agree with the one young woman who was comparing this to the film Black Fish about killer whales at Sea World. This film isn't even close.

I'm guessing that this film is preaching to the choir and if you feel strongly on the subject my negativity about the films functionality as a film is irrelevant. On the other hand if you want a film that actually makes sense and wins its points you should look elsewhere.

I would like to take umbrage with the film in putting Soco's response to the film at the very very end of the film several seconds after the end credits have rolled. Why include the response there when 99.99% of people seeing the film will never see it. Why feel like you're being fair if you're effectively not showing the response at all.
Posted by Steve Kopian at April 25, 2014