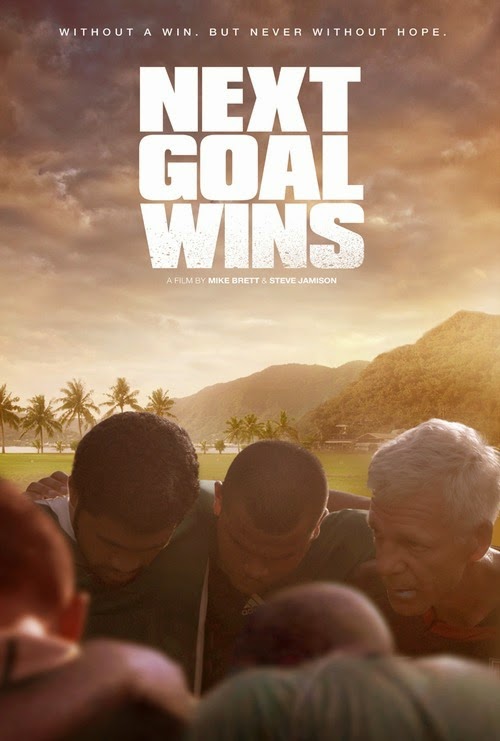 I was completely blindsided by The Next Goal Wins. My plan was simply to watch the film in the press library and be done with it, but then I realized that if I went to the press screening I could watch part of it in a gap between other “more important” films. I would then watch the end in the library. That was the plan. The reality of the situation was different- as Joe Bendel and the others in the theater all know, once you start Next Goal Wins you stay captivated until the end.

The film is the story of the American Samoan soccer team. Made up amateurs who work day jobs and play the game because they love to, the team was at the bottom of the FIFA ranking and were legendary for losing to Australia 32 to 0 in a World Cup qualifier. With the qualifiers for the 2014 World Cup coming the team decide to improve their ranking and contact the American Soccer Federation for help. The Federation send out word that the team is looking for a coach and only one man replies Thomas Rongen a crusty guy from the Netherlands who coached teams on every level imaginable. What happens when Rongen comes to town is the film.

No, what happens when he comes to town is absolute magic. This is a wonderfully glorious film that will make you feel good and carry you along. This isn’t about winning it all, this is just about trying to be better, to simply be able to score a goal on the big stage, to be able to show up and not fall on your face.

That the film works as well as it does is simply because you like the people. These are a group of guys you’d want to hang out with. Over the course of the film they become friends and by the time they head out to play in the qualifying matches for the World Cup they are close friends and you are invested on a personal level with what happens.

As I stated above the plan was to watch about an hour of this film and then wander off and see something else. It was clear about a half an hour in that I wasn’t going anywhere any time soon and instead I was just going to stay to the end. I put my watch in my pocket, put my notebook away and hunkered down to see what happened to my newly found friends.

What happens will have you talking to the screen. Joe Bendel in his review has openly stated that he was talking to the screen, and if I am honest I have to admit that I was too- as were several other people. You shout and cry and groan because you care. And when it’s all done you want to do it again.

And sadly the film seems not to be getting noticed much. Yes, the film was the Saturday Drive in Tribeca, but how many of you realize that the film is now in theaters? It is, it’s playing a limited engagement at Cinema Village in NYC. How can a film this good be so unpublicized? The mind boggles.

Do yourself a favor and go see this film. No seriously you want to go see this. Trust me you do, it a wonderful film that will inspire you and make you feel good. One of the best films from Tribeca and one of the best surprises of the film year.
Posted by Steve Kopian at April 28, 2014