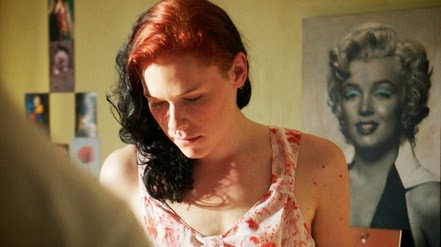 How good is this film?

I'm not sure but twenty four hours since I saw it I'm finding I like it a hell of a lot more the more I think about it.

The plot of the film has Sebastian, an androgynous looking young man going unhappily through life. Ideally he'd like to be Ellie. A girl friend tells him he needs needs to get laid. The trouble is sex for him is a weird form of release and punishment. Then one day he is rescued by handsome and dashing Andreas.  Sparks fly, the trouble is Andreas doesn't seem to see himself as gay. What follows is the course of their relationship.

Forget any notion that this is gay film. Just get that whole thought out of your head, this is simply an excellent drama. Yes it has full frontal male nudity, but so what? Its part of the story. If you're turned off by the notion of this not being a straight story it's your loss since this is a kick ass film.Actually I'm going to leave any and all talk of gender and that sort of stuff to other people and just say this is a drama.

That the film works at all is due wholly and completely to Saga Becker as Sebastian.  Her performance is absolutely incredible. You feel everything she's feeling. You completely understand what she's going through and you want to reach out and make everything is alright.  Its one of two performances that I've run across at Tribeca that deserve Oscar consideration.

It wasn't always like that. I walked out of the film thinking, well that was good, and I thought nothing of it. The trouble was that the more I thought about it the more I realized just how good the performances was. I kept marveling at little details that made it all the more real.

One of the must see (for adults) films to play at Tribeca this year.  For me it was a pleasant surprise and one that is getting better the more I think about it (though I still haven't sorted out the wobbles in the final third)