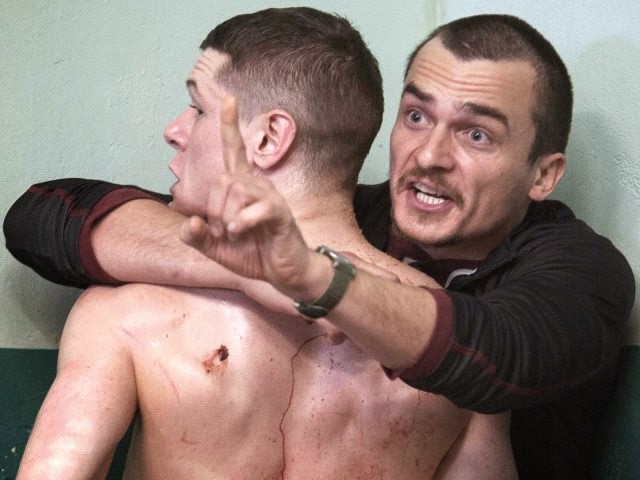 One of the best films screening at Tribeca this year Starred Up is  a movie that anyone who wants to see a great film should have on their radar.

The film is the story of Eric Love. He’s a 19 year old ball of rage who’s solution to anything is to beat it to a bloody pulp first and ask question later (He beats a man up mistakenly when the man approaches him to give him the lighter he asked for). As the film opens Love has been moved from the juvenile facility to an adult one because he’s starred up, meaning he’s violent and out of control. The twist is that the prison is the same one that his long absent father has been incarcerated in. His father is well connected but at the same time there is only so much he can do to protect his boy. Eric ends up on the radar of an anger management counselor who’s group may hold the key to changing him.

Let’s get it out of the way this film is violent and bloody. The language is rough. This is not your old school prison film. This is probably closer to the way it really is than any other film, especially considering the film was written by someone who works in the prison system. If you can’t handle violence and language stay away.

By any standard this is a gripping drama. This is the story of young man being thrown in the deep and being forced to fend for himself. It’s a film that doesn’t seem to pull any punches. It doesn’t drift into cliché. It doesn’t have a grand transcendent moment it just is a damn fine drama that just feels right.

While the film is all about Eric, the film is also about his dad Nate. Nate is a lifer who hasn’t seen his son in years because he’s been in prison. When Eric shows up he doesn’t know what to do and his prison survival skills get cocked up as he tries to be a good father, which is something he may not be capable of.

You’ve no doubt noticed a complete lack of detail- and that is entirely and completely the fault of the film. To be perfectly honest I had no chance to take any notes because I was too caught up in the film to take any. Seriously I didn’t want to look away to scribble something because I wanted to see what was going to happen next.

This is one of the best films of Tribeca and one of my favorites of the year. Everything in it shines from the performances to the script to the technical end, it all comes together to tell one hell of a story that has one of the more moving final minutes in any film I’ve seen this year.