kinda like being there: Tribeca Day 4 artists, fighters, and survivors

Today brought another surge in activity with a couple of press screenings, and a world premiere screening of a new suspense thriller at Tribeca. Sandwiched between those was one more trip to the Old School Kung Fu Fest over at Anthology to see one of my favorites from old, Master of the Flying Guillotine.  I was glad I didn’t skip this, as it gave new life to a film that captured my imagination when I was younger and provided a sense of what it might be like watching it in its original release in a simple black box of a movie theater.

Tomorrow We Disappear is a magnificent film, documenting a colony of artists, the Kathputli, in a rundown section of India that became the object of a redevelopment project, an undertaking that stood to wipe out the culture and art long practiced in this community. At the very start, one of the film’s subjects, a puppeteer tells the camera that he wants this film to be made to capture this place on film so that he may look back on it when it is gone. To many, myself included, it will be a glimpse into a wondrous fantasy like world of artists and performers applying all kinds of traditional arts living in a crowded multileveled sprawl. Walls are painted bright
blues and pinks, and homes seem to be formed in multileveled terraces scattered in every direction. Around corners children run after one another, people saw away at wood to build towering wood figures, and contortionists practice their body bending routines. We see a culture of enjoying life to the fullest, as people are candidly shown cajoling one another, laughing, playing…One artist tells the camera that children are taught to not have fear, thus they quickly become indoctrinated into these vivid arts.

The film does not give only a one sided plea for the community’s continued existence, but it does present the point of view of those wanting to stay as well as the other aspects of this complex issue. A younger subject expresses a desire to be placed in new developments, pointing to the land growing filthy and unkempt. We get a firsthand look at impromptu “town hall” meetings where this tightknit group of people argues heatedly yet refer to one another as family. The images of these arts being carried performed in a natural setting are unforgettable thanks to the sensitive yet persistently watchful filmmakers at work, mostly letting the subject speak for itself.

TOMORROW WE DISAPPEAR is being screened…Tuesday, April 22nd, and Friday the 25th. Click here for more information or to buytickets.

Glass Chin is some rather stylized modern day pulp. Dialogue sometimes feels natural but often as though it is the animation of a literary work, in this story about Bud Gordon, a boxer turned trainer trying to get an investment off the ground with nasty results. In turning to a powerful acquaintance with a hand fully pushed into criminal activity He runs afoul of a blackmail scheme putting before him a difficult choice: stick to convictions and be framed for a serious crime, or give in to pressures forcing you into corruption, which in this case would mean throwing a fight. The character stuck between a rock and a hard place is played by Corey Stoll, who played House Representative Peter Russo on House of Cards, Like Russo, Stoll is excellent here as a man filled with restless energy who can’t keep his mouth shut or stay out of trouble. Stoll again channels the spirit of a guy who is probably easily disliked by his peers but has obvious moral convictions he will not easily give up.

New York is staged as a place where disappointment is a part of the landscape. The cameras take us through many locales to make this point, showing a quaint suburban New Jersey town as the place where Bud and his girlfriend Ellen reside, and juxtaposing with to the West Village in downtown Manhattan where Bud meets his gangster pal and tries to make exciting things happen for himself. This is where exciting prospects await, but it is also a place of great artifice compared to the genuineness of Bud and Ellen‘s home, the diner where he can bare his soul about the trouble he is in to her, and the gym where no bullshit, just real hard work and talent are rewarded. Both within the story and in the way of it’s filmed, there is a constant back and forth between modern irony and sincerity, the director clearly favoring the latter, but sometimes indulging a bit too much in the former. Those didn’t always produce the laughs I felt the film was going for. Still it’s an often, if not always, engaging bit of storytelling.

GLASS CHIN is being screened Tuesday, April 22 and Saturday the 26th.  Click here for moreinformation or to buy tickets.

After going downtown for the Old School Kung Fu screening and then establishing some makeshift headquarters near to Tribeca’s screenings, all the better to stay out a bit late and catch some screenings early the next morning, I headed to the world premiere screening of horror thriller Indigenous. It is a film that speaks with a very particular time in mind, that being right now, and a very current preoccupation with social media, yet its message about it is not quite clear. There is a bit of the usual exchanges over its overbearing presence: ‘are you going to be like that with the camera the whole time?’/ ‘Well yeah, these things need to be documented for the world to see.’ Mind you, this between the movie’s central couple as they arrived at their holiday destination in Panama. But overall the aspect of social media is not really condemned or celebrated, just acknowledged as being there.

The suspense itself is very physical, involving the vacationers’ trip to a beautiful spot off the beaten path and their encounter with a creature likened to the mythical Chupacabra. A large cue is taken from found footage movies involving lots of panicked, jerky movement and surprise bursts of startling noise. The creature itself is impressive, quick moving, claws and fangs natural extensions of its sinewy body that blood is quite visibly coursing through.

While the director was not able to attend the screening, the young and attractive cast was on hand to discuss the physical demand of acting these scenes out in the actual jungle of Panama – nothing was done in a studio – and ice cold rivers, caves filled with bats’ unsavory leavings, and a very intense Chupacabra were all cited as challenges. Above and below are some pictures of the film's young and very attractive cast. 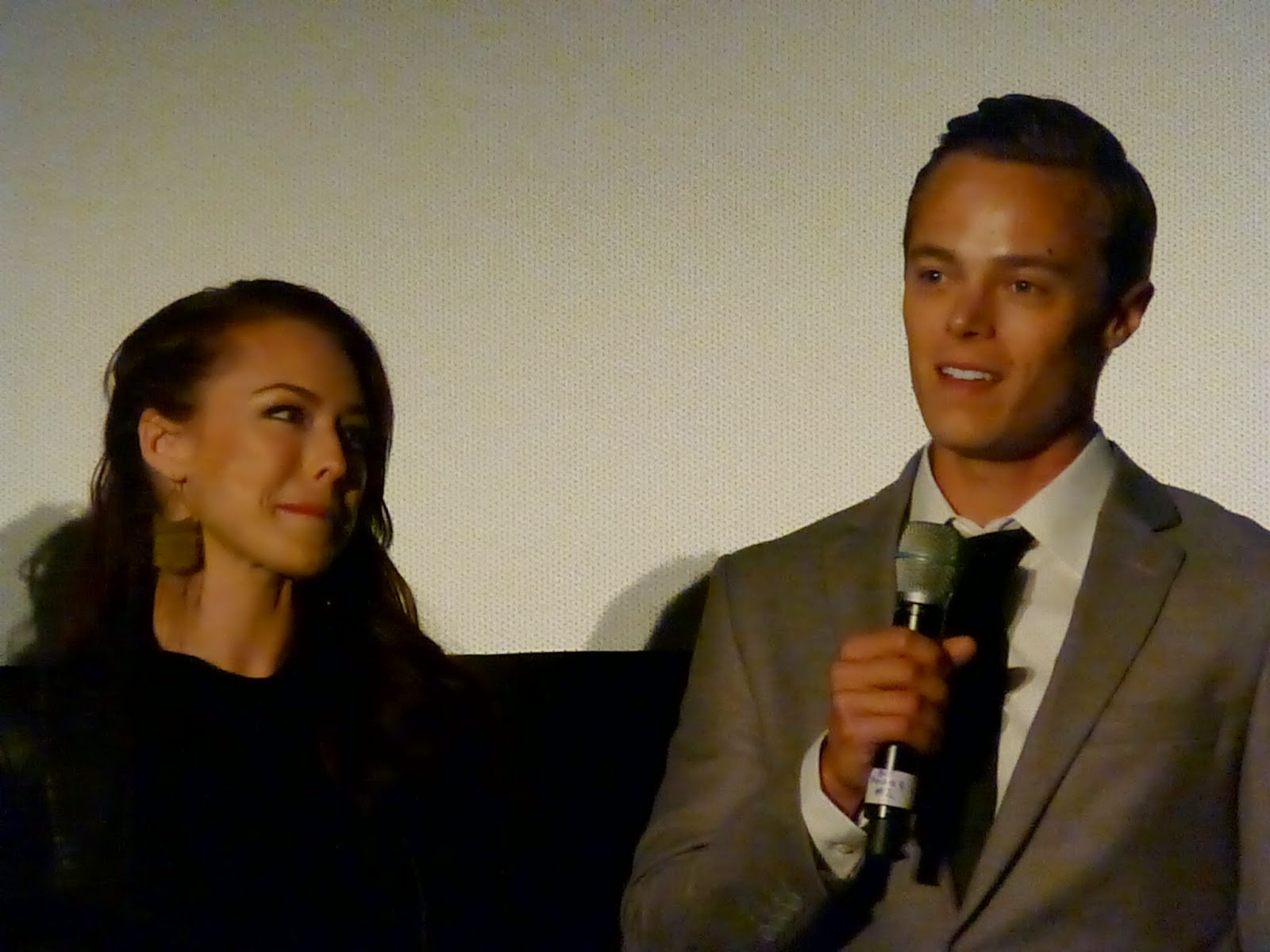 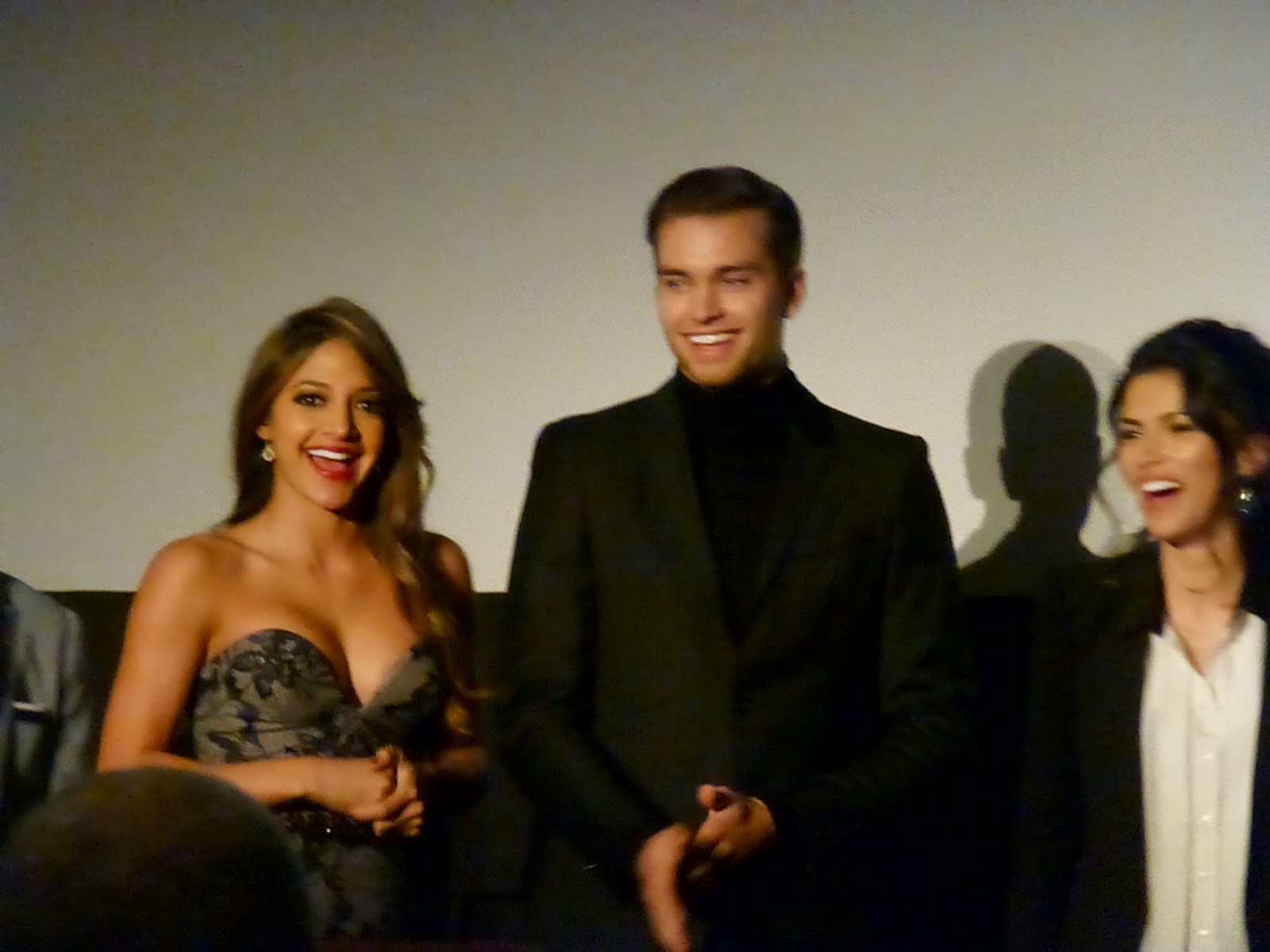 INDIGENOUS is being screened Tuesday, April 22,d and Friday the 25th.  Click here for moreinformation or to buy tickets.
Posted by mondo_curry at April 21, 2014