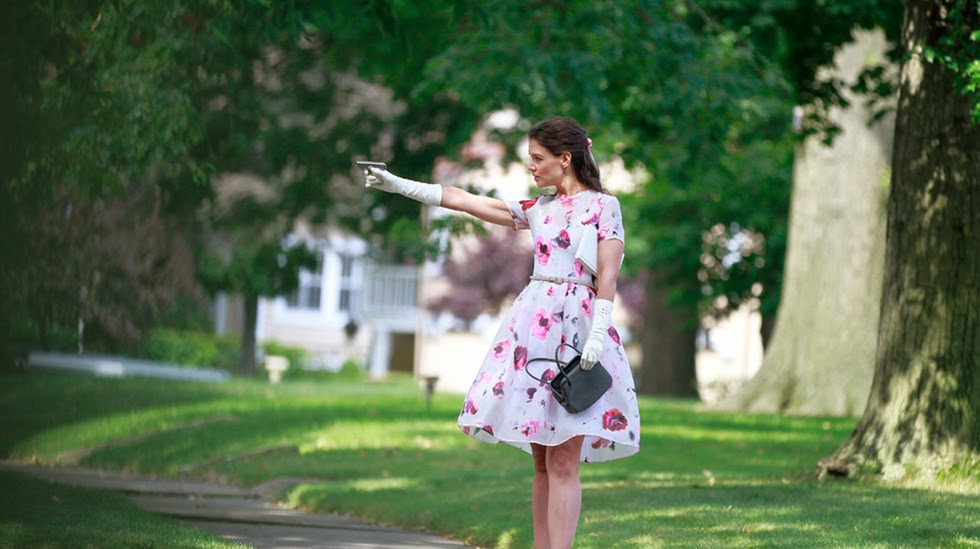 The character Miss Meadows is as kooky as they come. A Mary Poppins-esque substitute teacher that is full of positivity, a stickler for grammar, and insistent on taking figures of speech literally, she also has a penchant for murdering society’s nastier elements in cold blood. Katie Holmes is the right actress to return to the screen and play the role, staying consistent to all of Meadows’ verbal and physical quirks, and doing coming off very naturally as she balances poise with lethality. One might expect a darkly comic good time seeing a displaced Meadows stir up a commotion in the world we know; clearly she just wasn’t made for these times. However, the world around Meadows is just as wacky, to the point of being nonsensical, and there are so many inconsistencies in its presentation that very little rings true. A made-for-tv sensibility adhering to black and white truisms of criminal minds suggests we take her struggle between following the law and doling out vigilante justice seriously…once in a while. But premises are put before us that are so ridiculous, they at worst insult viewers’ intelligence, at best leave them stranded somewhere between satire and deadpan seriousness, while never satisfactorily achieving either one.

One of the first major instances of coming apart at the seams arrives when Miss Meadows takes the first grade class she inherits as a result the original teachers’ fatal illness on an outing to the local park. A point of was made of noting that this is a class of economically underprivileged, academically underperforming students, but I’ve never seen a group labeled as such that behave in such a well-mannered fashion or have such a luxurious classroom environment, not to mention a blessedly small class size. Miss Meadows goes to a nearby fast food restaurant - she had promised hotdogs for all - where there happens to be a mass murderer at the end of a shooting rampage (don’t worry she takes care of him). It is when she returns that there is an editing cut from the restaurant to the park so sloppy and awkward looking, it is made glaringly clear that the two locations are nowhere near each other. Even without this unsightly cut, there is such a disparity between the two locations it's obvious they are not in the vicinity of one another. But like seeing the stitching on a badly designed item of clothing, it makes its shabby construction that much more apparent.

In the same park on the same outing near an ice cream truck is a guy just hanging around who looks like a leering child-molesting pervert. And guess what, he is child molesting pervert. To be fair, this preponderance of villains in the same place and time does not go completely unaddressed; apparently the nearby prison has decided they cannot hold all of the criminals being convicted so they have just decided to release 800 of them or so into the world. Suddenly this is a world not like the comic book story Arkham Asylum – except at least in that Batman tale, there is the somewhat more logical premise of the convicts breaking out.

We are now faced with the impossible task of viewing Miss Meadows as a person who may be troubled and out of synch with her environment when clearly such a comic book fantasy world is exactly where she belongs. Who would criticize Batman if he were to run around in a cape and utility belt with this much villainy amassed in the same place? It makes Miss Meadows seem like perhaps the only sane character, which is strange considering her mother’s (another commanding performance by Jean Smart) influential words are clearly made out to be a message of misguidance.

Confusing characterizations also leave us unsure of which way the wind is blowing. That same menacing perp from before, when confronted by Miss Meadows, offers something like a voice of reason suggesting maybe Miss Meadows' bleak worldview is overly simplistic. However, not long after, in the midst of assaulting her and a student, when asked about changing his ways, his rationale is simply that he "changed again."

Miss Meadows behavior is not just randomly inspired. But when we do find out a dark secret from Miss Meadows’ past that keeps being hinted at in that schlocky looking manipulative Made-For-TV-Movie fashion, it is the most randomly conjured up criminal act occurring in a completely misplaced setting. The sort of thing that occurs in only the most delusional paranoid thinker’s mind. Perhaps this eye-for-an-eye world view is not that far off from the director’s intended message?

Miss Meadows is not devoid of some delirious fun. But if writer/director Karen Leigh Hopkins wants us to accept Miss Meadows’ vigilante-ism as a valid reaction to our world, the jokiness should probably go. Or if it is in fact all just for a laugh, then some of the very disturbing predatory acts (which give credence to the most blatant and obvious stereotypes) are very out of place.

I love fantastical premises and when satire is done well, I’m fully capable of suspending all manner of disbelief to enjoy a critical message. Inconsistently done, though, all manner of serious thought goes out the window and little remains except how well a film is made and how compelling or not a story is. If Miss Meadows is going to teach us about the difficulties of abiding by the law when the criminal justice system presumably fails us, she had better get the supporting details of her essay in order.