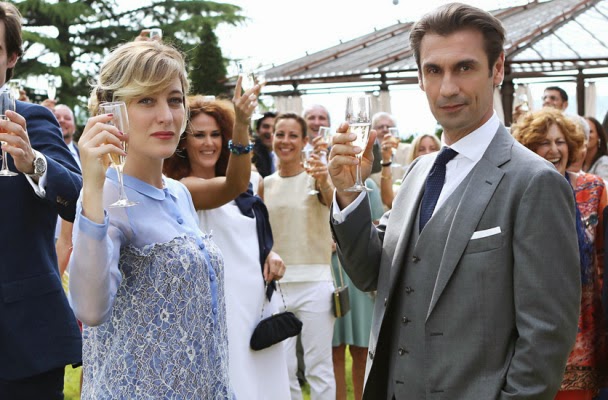 Pain and suffering across the classes is the name of the game in the film Human Capital, a film version of a novel by Stephen Amidon.

Beginning at the end the film deals with events leading up to the death of a bicyclist who is run off a road (that's not a spoiler since it occurs several minutes into the film) The film then flashes back in time six months to show how events transpire from the point of view of several characters leading up to the crash- beginning with Dino a man who is desperate to crash into the upper class that he mortgages his future to buy into a rich family's hedge fund, despite several factors that should have told him not to do it.

A grand tragedy that lays open the folly of chasing wealth and the certainty that money does not buy happiness Human Capital is a well acted and well made film that is sure to be popping up its head at the end of the year's awards time. This is a sumptuous production that just seems to be firing on all cylinders from the get go.

Tension is ratcheted up early, not so much from the death, since we don't know the dead man, rather from Dino's attempt at fitting in where he doesn't belong. Its uncomfortable and sadly comedic. We know he's going to get it on the back end and we twist waiting for it all to play out.

A controversial film in it's home country of Italy where it was seen as an unfair attack on the rich, the film is much more than than and an intriguing examination of the human psyche and greed. As for it being specifically an attack on one group or country consider that the source novel was set in the exotic land known as Connecticut.

Put this on your radar because odds are this is going to be coming your way soon.
Posted by Steve Kopian at April 26, 2014