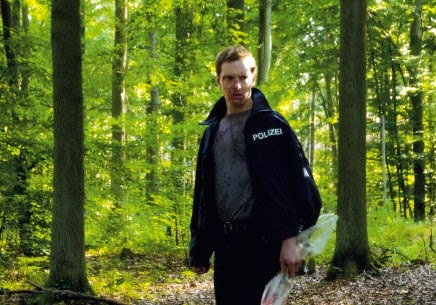 Jakob a cop in Germany is feeding a wolf in hope of keeping it in the woods and away from the village. He gets a  weird phone call and ends up going to an abandoned house with a parcel that was shipped to him at the police station. In the house he meets a man in a dress. In the parcel is a katana. The man in the dress takes the sword and disappears into the woods. Jakob gives chase...

Very strange film is decidedly on it's own trajectory. Nominally a thriller of sorts the film is actually going for something else entirely. I have no idea how to describe it without giving anything away...on the other hand I'm not sure its worth the time and the effort to get to the end.  If I may be frank my interest started to wane about 35 minutes in, which was the half way point and had the film not been so short I probably would have walked away and gone on to something else.

I'm not sure this was worth the effort of tracking the film down.

Addendum:
I saw this film several weeks before the Tribeca press screenings and I've been pondering it ever since then. When I saw it on the Tribeca list I wrote it up (the brevity of the piece is because the film didn't make a huge impression on me). To be honest after several weeks of pondering I still don't know what I think, however I've talked to several friends who saw it at the press screenings and they really liked it.  They loved the fairy tale references and other things that run through the film. Based on our conversations I came to the conclusion that this is a film that is going to work best if you see it in a theater. I saw it onmy laptop streaming as a screener link.  My advice- If you can see it Der Samurai at Tribeca on the big screen do so since it's going to play much better than if you saw it on TV at home.
Posted by Steve Kopian at April 14, 2014