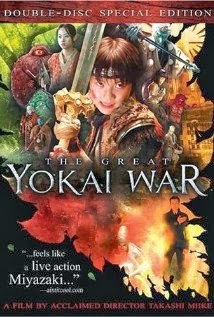 Where was this film when I was a kid? After his parents split up Tadashi moves with his mom to live his his grandfather. Tadashi's sister stays with their dad and they talk frequently on the phone. Grandfather is only "here" every third day. Moms never really home. The kids always are picking on the poor kid. During a village festival Tadashi is chosen the "kirin rider" or spiritual champion of the peace and justice. Little does he suspect that soon he will have to actually step into role of hero as the forces of darkness join up with the rage of things discarded in a plot to destroy mankind and the spiritual world.

Okay that was the easy part. Now comes the hard part, trying to explain the film.

This is a great kids film. No this is a great film,flawed, (very flawed?) but a great film none the less. It unfolds like all of those great books you loved as a kid and is just as dense at times as Tadashi struggles to find the strength to become a hero. Watching it I felt I was reading a great book, and thought how huge this would have been if it was a book.

I loved that the film does not follow a normal path. Things often happen out of happenstance or through miscommunication, one character gets sucked into events simply because his foot falls asleep. There are twists and turns and moments that seem like non sequiters and are all the more charming for it (which is typical Miike) Certainly its a Takashi Miike film. That Japanese master of film is clearly in charge of a film that often touching, scary and funny all at the same time. No one except Miike seems to understand that you can have many emotions at the same time, or that you can suddenly have twists as things get dark one second and then funny the next. I admire the fact that Miike has made a film that is bleak and hopeful, that doesn't shy away from being scary, I mean really scary, especially for kids. This is the same dark territory that should be in the Harry Potter movies but rarely is. This a dark Grimms tale with humor. My first reaction upon seeing the opening image was that I couldn't believe anyone would begin a kids film with a picture of the end of the world, then I realized who was making the movie. Hats off to Miike for making a movie that knows kids can handle the frightening images.

Its also operating on more than one level. The mechanical monsters that the bad guys make are forged from mankind's discarded junk. Its the rage of being thrown away that fuels the monsters.One of the Yokai (spirits) talks about the rage sneakers thrown away because they are dirty or too small feels when they are tossed. You also have one of the good guys refusing to join the bad guys because that would be the human thing to do. Its a wild concept, but like other things floating around its what lifts this movie to another level. (there are a good many riffs and references to other movies,TV shows and novels that make me wonder who this film is for since kids may not understand them, though many parents will)

And of course there are the monsters. They run the gamut from cheesy to spectacular with stops everywhere in between. Frankly you have to forgive the unevenness of their creation simply because they are has to be hundreds if not thousands of monsters on screen. Its way cool and it works. One of the main characters is a Yokai which I think is best described as a hamster in a tunic and is often played by a stuffed animal, it looks dumb and yet you will be cheering the little bugger and loving every moment he rides on Tadashi's head. (Acceptance is also easier if you've ever seen the old woodcuts of the weird Japanese monsters)

I mentioned flaws, and there are a few. The effects are uneven, some of the sudden turns are a bit odd (even if understandable) and a few other minor things which are fading now some two hours after watching the film.. None of them truly hurt the film over all, however most kind of keep you from being completely happy with the movie.

I really loved this movie. I'm pretty sure that if I saw this as a kid it would have been my favorite film of all time. (where's the English dub?).See this movie. Its a great trip. (Besides its a good introduction to the films of Miike minus the blood and graphic sex)
Posted by Steve Kopian at April 06, 2014